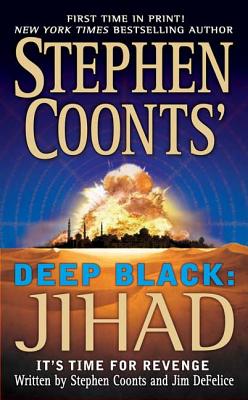 The word's most effective anti-terrorist force has the tools to monitor every move the enemy makes. They've planted a listening device inside a terrorist's skull, and activated a video spy drone disguised as a bird. But knowing is only half the battle…

Multi-lingual, nerves-of-steel agents Charlie Dean, Lia DeFrancesca, and Tommy Karr prowl the winding streets of Istanbul to the crowded airports of America to stop terrorists in their tracks. Hooked into a real-time, high-tech system, this army of three goes head-to-head with the most dangerous people in the world.

Al Qaeda is launching a series of devastating attacks against the West—and the ultimate strike is aimed at the heart of the USA! In a war where both sides operate in deep disguise, Deep Black must fight a world where betrayal, trust, faith, and doubt collide….

Stephen Coonts' Deep Black: Jihad is the fifth book in this thrilling series.

Stephen Coonts is the author of The Disciple, The Assassin, and the Deep Black and Saucers series, among many other bestsellers. His first novel, the classic flying tale Flight of the Intruder, spent more than six months at the top of The New York Times bestseller list. A motion picture based on the book was released in 1991. His novels have been published around the world and translated into more than a dozen languages. In 1986, he was honored by the U.S. Naval Institute with its Author of the Year Award. He is also the editor of four anthologies, Combat, On Glorious Wings, Victory and War in the Air. Coonts served in the Navy from 1969 to 1977, including two combat cruises on the USS Enterprise during the last years of the Vietnam War.

Best known for American Sniper, Jim DeFelice is the author of more than a dozen New York Times best-sellers and a host of other books, many of them celebrating the lives of unsung American heroes.

“Coonts knows how to write and build suspense...this is the mark of a natural storyteller.” —The New York Times Book Review
or
Not Currently Available for Direct Purchase
Copyright © 2020 American Booksellers Association