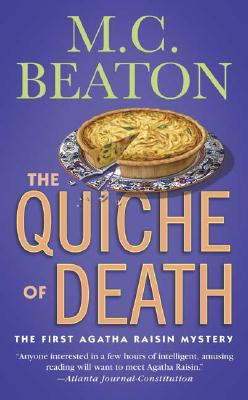 The Quiche of Death

Putting all her eggs in one basket, Agatha Raisin gives up her successful PR firm, sells her London flat, and samples a taste of early retirement in the quiet village of Carsely. Bored, lonely and used to getting her way, she enters a local baking contest: Surely a blue ribbon for the best quiche will make her the toast of the town. But her recipe for social advancement sours when Judge Cummings-Browne not only snubs her entry--but falls over dead After her quiche's secret ingredient turns out to be poison, she must reveal the unsavory truth

Agatha has never baked a thing in her life In fact, she bought her entry ready-made from an upper crust London quicherie. Grating on the nerves of several Carsely residents, she is soon receiving sinister notes. Has her cheating and meddling landed her in hot water, or are the threats related to the suspicious death? It may mean the difference between egg on her face and a coroner's tag on her toe


Praise For The Quiche of Death…

“In ‘Agatha,’ Beaton has blended perfectly the classic ingredients of a village with secrets and stock characters. The irascible but endearing personality of Agatha Raisin is like a heady dash of curry. May we have another serving, please.”—Detroit Free Press

“Beaton’s playful depiction of village life makes it all a delicious romp.”—Publishers Weekly

“The strong narrative drive comes from Agatha’s changing personality as awkward and perilous situations shape her into a softer, more admirable person.”—Chicago Sun-Times

“Beaton has thus launched a new series featuring an eccentric sleuth with human foibles galore, combined with an indomitable spirit, who will long persevere and endear herself to the village (and the reader).—San Antonio Express-News

“Beaton, always deft with imperfect human beings, guides Agatha through her travails until she becomes almost likeable. You will want to see her again.”—Houston Post

M. C. Beaton has been hailed as "the new Queen of Crime." She is "The New York Times" bestselling author of the Agatha Raisin mysteries, including "As the Pig Turns" and "Busy Body," set in the English Cotswolds, as well as the Hamish Macbeth mysteries set in Scotland. She has also written historical romance novels and an Edwardian mystery series under the name Marion Chesney. Before writing her first novels, Beaton worked as a bookseller, a newspaper reporter, a fashion critic, and a waitress in a greasy spoon. Born in Scotland, she currently divides her time between Paris and a village in the Cotswolds. She was selected the British Guest of Honor for the Bouchercon World Mystery Convention in 2006.
Loading...
or
Not Currently Available for Direct Purchase