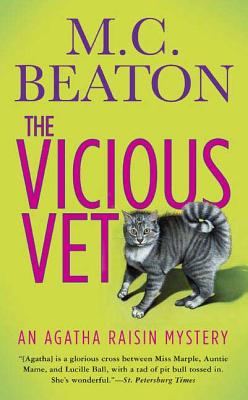 "Beloved author M.C. Beaton has delighted readers and fans alike with her Agatha Raisin mysteries. Now here is the second novel in the series that started it all The Vicious Vet."

A PURR-FECT CRIME IN THE COTSWOLDS
Former London PR agent, Agatha Raisin still hasn't adjusted to village life where the only prospect for a hot evening out is a meeting of the Ladies Society. And since her overtures toward James Lacey the retired military man next door have failed, Agatha jumps at the chance to visit the new vet, who's single and good-looking. Although Agatha's tabby hasn't a thing wrong with him, Hodge endures having a thermometer shoved up his bum in the name of romance. Unfortunately his sacrifice is all for naught when the vet is soon found dead next to a high-strung horse.

The police call the vet's demise a freak accident, but Agatha convinces the hard-to-get James Lacey, who's also bored in the Cotswolds, that playing amateur detective might be fun. Unfortunately, just like curiosity killed the cat, Agatha's inept snooping is soon a motivation for murder...

M. C. Beaton has been hailed as "the new Queen of Crime." She is The New York Times bestselling author of the Agatha Raisin mysteries, including As the Pig Turns and Busy Body, set in the English Cotswolds, as well as the Hamish Macbeth mysteries set in Scotland. She has also written historical romance novels and an Edwardian mystery series under the name Marion Chesney. Before writing her first novels, Beaton worked as a bookseller, a newspaper reporter, a fashion critic, and a waitress in a greasy spoon. Born in Scotland, she currently divides her time between Paris and a village in the Cotswolds. She was selected the British Guest of Honor for the Bouchercon World Mystery Convention in 2006.

Praise For Agatha Raisin and the Vicious Vet…

"A lively and entertaining tale."--BookLoons