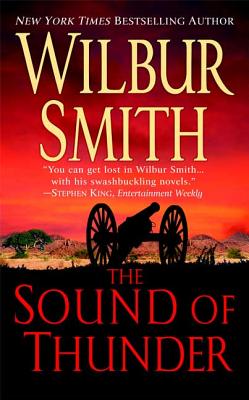 The Sound of Thunder

The Sound of Thunder, a Courtney Family Adventure by Wilbur Smith

The year is 1899. The British Empire is at the height of its power. But in South Africa, proud Dutch colonists defy the Queen and her army--and a lush, wild world is torn apart by guns, spears, and swords.

Sean Courtney had been tragically separated from his family, but the Boer War has brought him back to his homeland--and into the sights of his enemy's guns. It has also returned him to Ruth Friedman, the only woman Sean can love, even though he shouldn't. As Sean's loyalties--to nation, man, and blood--are tested, a saga of duty and betrayal unfolds....

“A violent saga-type story set on Boer War South Africa and told with vigour and enthusiasm, the author of When the Lion Feeds spins a fine tale.” —Evening Standard

“A highly readable novel of history and adventure ... Wilbur Smith has a sense of character too.” —Books and Bookmen

“An extravagant and vigorous novel ... its many pages provide constantly changing incidents and a gallery of memorable portraits.” —Liverpool Daily Post

“The pace would do credit to a Porsche, and the invention is as bright and explosive as a fireworks display.” —Sunday Telegraph