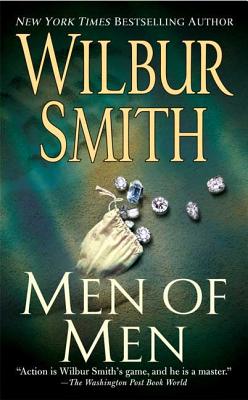 Men of Men by Wilbur Smith

It was called The Devils's Own: a steep scar in the African earth, around which men toiled with picks, shovels, and dreams of the milky treasures that would become prized, polished diamonds. In this demonic race, native tribesmen became miners. Sometimes they became thieves. And then they became rebels.

Zouga Ballantyne, an African-born Englishman, sees the Devil's Own mine as his ticket to the North: a realm of waterfalls and fertile plains, teeming wildlife, and seeded fields of gold. But what happens in the diamond mines of the fledgling Boer Free State sets the course for Ballantyne and a cast of comrades, enemies, and lovers--and for the continent itself.

From the visions of imperialists to the fury between a father and a son, from the lengths a man will go for a woman and a woman for her convictions, a tragic clash of generations and civilizations was shaking 19th-century Africa, where some warriors fought for their gods--and others for the men who came before them...


Praise For Men of Men…

“Action is Smith's game, and he is a master.” —The Washington Post Book World

“Smith is a master.” —Publishers Weekly

“One of the world's most popular adventure writers. ” —The Washington Post Book World

“A rare author who wields a razor-sharp sword of craftsmanship. ” —Tulsa World

“Wilbur Smith is one of those benchmarks against whom others are compared.” —The Times (UK)

“Best Historical Novelist--I say Wilbur Smith, with his swashbuckling novels of Africa. The bodices of rip and the blood flows. You can get lost in Wilbur Smith and misplace all of August.” —Stephen King

“Action is Wilbur Smith's game, and he is a master.” —The Washington Post Book World

“Smith is a captivating storyteller.” —The Orlando Sentinel

“No one does adventure quite like Smith.” —Daily Mirror (UK)

“A thundering good' read is virtually the only way of describing Wilbur Smith's books.” —The Irish Times