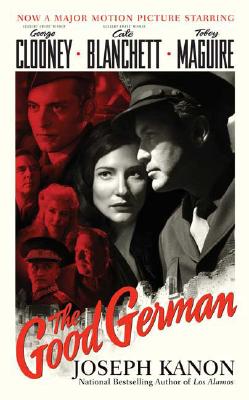 The bestselling author of Los Alamos and Alibi returns to 1945. Hitler has been defeated, and Berlin is divided into zones of occupation. Jake Geismar, an American correspondent who spent time in the city before the war, has returned to write about the Allied triumph while pursuing a more personal quest: his search for Lena, the married woman he left behind. When an American soldier's body is found in the Russian zone during the Potsdam Conference, Jake stumbles on the lead to a murder mystery. The Good German is a story of espionage and love, an extraordinary re-creation of a city devastated by war, and a thriller that asks the most profound ethical questions in its exploration of the nature of justice, and what we mean by good and evil in times of peace and of war.


Praise For The Good German…

"Joesph Kanon…has woven his plot seamlessly into the historical background. As the hunt for the missing scientist gathers speed, the moral and emotional dimensions of the story become more complex. The mystery takes on the weight of the deepest questions of right and wrong as the novel's action moves through a ravaged Berlin so exactly depicted that one feels Kanon must have traveled in time to witness this landscape himself…In its articulation of a personal experience of the war and its aftermath, and in the plain power of its prose, The Good German rivals Irwin Shaw's novel The Young Lions, its history imaginatively accessible, its plot historically inevitable. A novel that brings to life the ambiguities at the heart of our country's moral legacy. Provocative, fully realized fiction that explores, as only fiction can, the reality of history as it is lived by individual men and women." -The New York Times

"Kanon is the heir apparent to Graham Greene and early-and mid-passage le Carre, for he writes of moral quandaries that are real and not created to drive a plot."--Robin W. Winks, The Boston Globe

JOSEPH KANON is the author of four novels, including "Los Alamos"," ""The Prodigal Spy, "and "Alibi." Before becoming a full-time writer, he was a book publishing executive. He lives in New York City.
Loading...
or
Not Currently Available for Direct Purchase