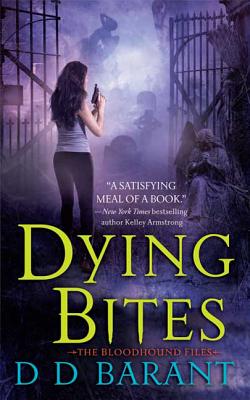 Her job description is the "tracking and apprehension of mentally-fractured killers." What this really means in FBI profiler Jace Valchek's brave new world-one in which only one percent of the population is human is that a woman's work is never done. And real is getting stranger every day…

Jace has been ripped from her reality by David Cassius, the vampire head of the NSA. He knows that she's the best there in the business, and David needs her help in solving a series of gruesome murders of vampires and werewolves. David's world—one that also includes lycanthropes and golems—is one with little knowledge of mental illness. An insane serial killer is a threat the NSA has no experience with. But Jace does. Stranded in a reality where Bela Lugosi is a bigger box office draw than Bruce Willis and every full moon is Mardi Gras, Jace must now hunt down a fellow human before he brings the entire planet to the brink of madness. Or she may never see her own world again…

“Dying Bites is wacky, unpredictable, fresh and amazing. I would kill to write as well as DD Barant. Seriously.” —Nancy Holder, author of Pretty Little Devils

“Barant's well-developed world offers intriguing enhancements to mythology and history. Jace is remarkable, strong-willed and smart, and she sets an unstoppable pace. Look for the Bloodhound Files to go far.” —Publisher's Weekly

“Surviving in this unique alternate reality will take a heroine with plenty of guts, moxie and a sense of the absurd. This fresh and original take on urban fantasy follows the first-person exploits of an FBI profiler literally yanked out of her world. Huge kudos to Barant for spicing things up with a story that expertly integrates detective work, kick-butt action and a wacky sense of humor. Make sure you get in early on the outstanding new Bloodhound Files series.” —Romantic Times

DD Barant lives in Vancouver, BC, and loves monsters, chocolate, animals, reading, comics and lying naked on the beach, while hating bullies, narrow-minded people, Sea Urchin Sushi and gluten. Awful, terrible, gluten. Barant is the author of The Bloodhound Files, starting with Dying Bites and Death Blows.
Loading...
or
Not Currently Available for Direct Purchase