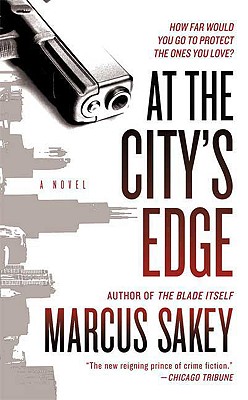 At the City's Edge

Jason Palmer loved being a soldier. But after returning from Iraq with an “other than honorable” discharge, he’s finding that rebuilding his life is his toughest battle yet.

Elena Cruz is the first woman to make Chicago’s prestigious Gang Intelligence Unit.  A fearless cop, she’s ready for any challenge…until Jason Palmer’s brother, a prominent community activist on the South Side, is murdered—in front of his son.

Now Jason and Elena are caught in a conspiracy stretching from the darkest alleys of the ghetto to the manicured lawns of the city’s power brokers. In a world where corruption and violence are simply the cost of doing business, the two of them are all that stand between an innocent child—and the killers that hunt him.


Praise For At the City's Edge…

“Nothing short of brilliant...as much a work of literary fiction as crime fiction...Sakey’s latest solidifies his position as the new reigning prince of crime fiction.” —The Chicago Tribune

“Gritty and compelling, packed with action, At the City’s Edge crackles and sears like a rip-roaring fire.”
—Tess Gerritsen, bestselling author of The Bone Garden

“[Sakey] proves a shrewd observer of cultural politics...The action is fast and furious...A hyperrealistic look at our most downtrodden communities.” —Chicago Sun-Times

“Goes from zero to sixty in a blazing rush. Sakey knows how to thrill a reader.” —David Morrell, bestselling author of First Blood and Scavenger

“Complex, multilayered, and above all, intriguing. This is one novel that you won’t soon forget.” —Book Reporter

“Tension-laden...[Sakey] knows how to create realistic suspense and action that puts him in league with authors such as George Pelecanos and T. Jefferson Parker.” —Florida Sun-Sentinel

“Conspiracy and corruption scenarios twist together in startling ways in this ambitious thriller. It’s fast paced from the get-go and just as good as Sakey’s stellar debut.” —Library Journal

“High-tension action, intricate plotting and a Chicago setting that thrums and pulses with the feel of the city...Sakey, who draws disturbing and thought-provoking parallels between Baghdad and Chicago, provides enough narrow escapes, traps and obstacles to satisfy a Die Hard fan, but enough meat to please readers who demand more than pyrotechnics.” —Publishers Weekly

“Will blister your fingers as it keeps you up late into the night, but unlike most quick reads, its subtleties will linger with you far longer.”—Mystery Book Spot

MARCUS SAKEY is the author of "The Blade Itself" (available from St. Martin's Paperbacks). He has shadowed homicide detectives, toured the morgue, interviewed soldiers, ridden with gang cops, and learned to pick a dead bolt in sixty seconds. Born in Flint, Michigan, he now lives in Chicago with his wife.
Loading...
or
Not Currently Available for Direct Purchase