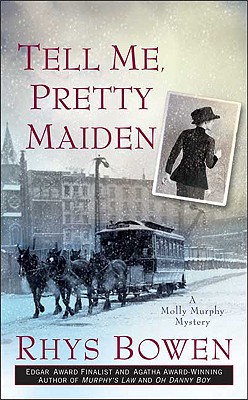 It's wintertime in New York, and for the first time since Irish immigrant Molly Murphy started her early-twentieth-century detective agency, she is completely snowed in with work. While she's very much in demand by some of Broadway's brightest stars and Fifth Avenue's richest families, Molly must admit that it's time for her to get some help. Her beau, the recently and wrongly suspended police captain Daniel Sullivan, would make an ideal associate. But before Molly and he can agree on the terms of his employment, they stumble upon a young woman lying unconscious in the middle of a snow-covered Central Park. When the woman wakes up, she is disorientated and has and lost her ability to speak. The authorities are about to pack her off to an insane asylum--but Molly can't help but step in and take on yet another stormy case....


Praise For Tell Me, Pretty Maiden…

“Winning…It’s all in a day’s work for this delightfully spunky heroine.”—Publishers Weekly

Rhys Bowen is the author of the award-winning Molly Murphy and Constable Evans mysteries. Her novels have garnered an impressive array of awards and nominations, including the Anthony award for her novel "For the Love of Mike" and the Agatha Award for "Murphy's Law." Her books have also won the Bruce Alexander Historical Award and the Herodotus Award, and have been shortlisted for the Edgar, the Agatha, the Macavity, the Barry, and the Mary Higgins Clark Award. She has also written "Her Royal Spyness," a series about a minor royal in 1930s England, and she is the author of several short stories, including the Anthony Award winning "Doppelganger." Her story "Voodoo" was chosen to be part of the anthology of the best of 50 years of "Alfred Hitchcock Mystery Magazine." Ms. Bowen was born in Bath, England, and worked as an announcer and studio manager for the BBC in London, before moving to Australia and then California. It was here she started writing children's and young adult novels, and then moved on to mysteries with the Constable Evans novels. When not writing she loves to travel, sing, hike, play her Celtic harp, and entertain her grandchildren. She lives in San Rafael, California."
Loading...
or support indie stores by buying on
(This book is on backorder)