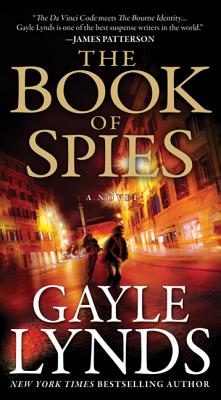 The Book of Spies

For centuries, emperors, historians, and even the Vatican have tried to locate Ivan the Terrible's lost collection of magnificent works, the real-life Library of Gold. Now one of the volumes, The Book of Spies, has surfaced, as have its clandestine owners—a cabal of the globe's most powerful, dangerous men.

When the CIA discovers a connection between the legendary library and a bank account linked to terrorists, they bring in rare-books curator Eva Blake. Soon an attempt is made on Eva's life—and she is on the run. Determined not only to survive but to uncover the truth, Eva turns to the only person she can trust: Judd Ryder, a former intelligence officer with a troubled past and an agenda of his own.

Racing from London to Rome, Istanbul to Athens, it's up to Judd and Eva to track down the gold-covered, bejeweled books in the fabulous library—and find a way to stay ahead of the men who will stop at nothing to protect their interests…and are dead-set on keeping their secrets hidden.


Praise For The Book of Spies: A Novel (The Judd Ryder Books #1)…

“Gayle Lynds is one of the best suspense writers in the world. The Book of Spies is a completely unique work, but for the purpose of inciting all of you to read it, let me say the Da Vinci Code meets Bourne Identity--which happens to be completely accurate.” —James Patterson

“Hands-down the best book I've read all year. Grippingly paced, poignant, surprising with every turn of the page, this novel stunned me. Gayle Lynds has long been a master of espionage, but with this book, she proves that true masters only get better over time. Destined to become an instant classic in the field. In a word: Wow.” —James Rollins, New York Times bestselling author of The Doomsday Key

“Characters whose hidden depths are just starting to be revealed. When you begin a Lynds book, a roller-coaster ride is in store.” —RT BOOKreviews (A Top Pick)

“A modern classic...Rich with history, breathtaking in plot and pacing, ripe with living, breathing characters we truly care about--or utterly fear--The Book of Spies will consume you from page one.” —Jeffery Deaver

“Makes the Jason Bourne adventures look like tourist postcards. Kick this to the top of your reading list.” —Dick Adler, The Rap Sheet

“Plentiful tradecraft and relentless danger combine with some clever plot twists for an entertaining read.” —The Economist on THE LAST SPYMASTER

“Lynds [is] superbly gifted…. Her narrative skills and her character-creation engine are as high octane as they come.” —Chicago Tribune on THE LAST SPYMASTER

“[A] classic espionage thriller.” —Publishers Weekly on THE LAST SPYMASTER

“Lynds's books have long been acclaimed for their authenticity in describing the covert world, and this one is no different. The Last Spymaster is filled with rich characters and details ripped from the world of espionage...reminiscent of the work of Robert Ludlum or Frederick Forsyth.” —Chicago Sun-Times on THE LAST SPYMASTER

“Like the fearsome plunge on a dangerous roller coaster, this thriller…gets your heartbeat racing….Lynds has added another jewel to her tiara as one of the reigning queens of the international spy-thriller genre.” —Library Journal on THE LAST SPYMASTER