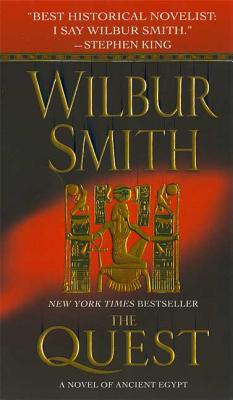 A stunning, heart-pounding, journey into the lost world of the Pharaohs.

Wilbur Smith has earned international acclaim for his bestselling River God, The Seventh Scroll, and Warlock. Now, the unrivaled master of adventure returns with the eagerly awaited sequel to his thrilling Egyptian series with his most fantastic story yet. The Quest continues the story of the Warlock, Taita, wise in the lore of the gods and a master of magic and the supernatural.

Egypt has been struck by a series of terrible plagues, killing its crops and crippling its people. Then the ultimate disaster befalls the kingdom. The Nile fails. The waters that nourish and sustain the land dry up.
Something catastrophic is taking place in the distant and totally unexplored depths of Africa, from where the mighty river springs. In desperation the Pharaoh sends Taita, the only man who might be able to find his way through the hazardous territory to the source of the Nile and discover the cause of all their woes. But not even Taita can have any idea of what a terrible enemy waits in ambush in those dark lands at the end of their world.

No other author can conjure up the violence and mystery of Ancient Egypt like Wilbur Smith. The Quest marks his stirring return to the acclaimed series and proves once again why fans such as Stephen King praise him as the world's "best historical novelist."

“Smith brings to life…the world of Egypt so much so you can almost feel the heat and taste the dust as the narrative builds to cracking pace.” —Irish News

“Fans of blockbuster thriller writer Wilbur Smith will not be disappointed with The Quest.” —Financial Times

“Smith writes with a fresh, crisp style... full of zest... The Quest is a hefty but gratifying read, long-awaited by his legion of admirers.” —Daily Express

“No one does adventure quite like Smith and, true to form, his latest is a swirling torrent of unexplored depths and manliness in ancient Egypt.” —Daily Mirror

“The Quest is not a book for the easily queasy. After reading the scene about Bronze Age brain surgery, you'll never look at bamboo shish kebab skewers the same way again. It is a novel that is violent, fast moving and utterly engrossing.” —Edmonton Journal

“It's the sort of book readers live for, the sort that sates, however fleetingly, the primal need for story that so often these days doesn't get fed.” —Vancouver Sun

“Fans of bestseller Smith's ancient Egyptian series will welcome the fourth book in the saga, which picks up where Warlock left off. … Once again Smith deftly blends history, fantasy and mythology, but newcomers should be prepared for grisly deaths and mutilations.” —Publishers Weekly

“Smith's Africa is bewitching. We see and hear elephants, lions, hippos, and wild, weird creatures. Lakes and plains stretch as far as the horizon. His descriptions of the landscape are so real it seems we should be able to find these places on the map. … Smith's narrative is a page-turner. His characters are absorbing and believable. We fear for our heroes and cheer for them when they triumph in bloody battle. … When supernatural powers open up the ground before us, we teeter on the brink and can hardly stand to look over the edge… and yet, we must.” —The Salt Lake Tribune