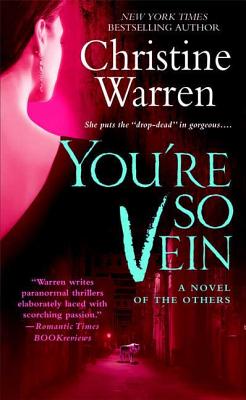 You're So Vein (Paperback)

A Novel of The Others

Ava Markham is beautiful, savvy, chic, and more at home with Kate Spade than with the idea of fangs and fur. She can't get quite used to the fact that some of closest friends have crossed over to the Other side. Then one night she is attacked by a rogue vampire, and her deepest fears are realized when her body begins a dangerous transformation from human to immortal—a change she cannot survive without the help of an alluring stranger who comes to her rescue…

Vladimir Rurikovich, an elite member of the European Council of Vampires, is on the prowl for a murderous vampire fugitive on the night he saves Ava from the clutches of death. It takes just one look for Dima to know he cannot live another eight centuries without the stunning and seductive Ava—until he discovers a secret about her bloodline that could change everything…

Christine Warren is the bestselling author of The Others series, including Wolf at the Door, Big Bad Wolf, Born to Be Wild, Prince Charming Doesn’t Live Here, and Black Magic Woman. Born and raised in coastal New England, she now lives as a transplant in the Pacific Northwest. (She completely bypassed those states in the middle due to her phobia of being landlocked). When not writing, she enjoys horseback riding, playing with her pets, identifying dogs from photos of their underbellies, and most of all reading things someone else had to agonize over.


Praise For You're So Vein: A Novel of The Others…

“Warren piles on the humor as two people used to getting their own way go head to head. The sparks do fly!” —Romantic Times BOOKreviews on You're So Vein