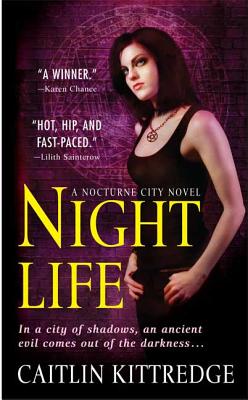 The first book in a thrilling, addictive new series by a talented new voice in dark fantasy. Welcome to Nocturne City, where werewolves, black magicians, and witches prowl the streets at night…

Among them is Luna Wilder, a tough-as-nails police officer whose job is to keep the peace. As an Insoli werewolf, Luna travels without a pack and must rely on instinct alone. And she's just been assigned to find the ruthless killer behind a string of ritualistic murders—a killer with ties to an escaped demon found only in legend…until now.

But when she investigates prime suspect Dmitri Sandovsky, she can't resist his wolfish charms. Pack leader of a dangerous clan of Redbacks, Dimitri sends her animal instincts into overdrive and threatens her fiercely-guarded independence. But Luna and Dimiri will need to rely on each other as they're plunged into an ancient demon underworld and pitted against an expert black magician with the power to enslave them for eternity…

Caitlin Kittredge is the author of the Nocturne City and Black London series, as well as several short stories. She started writing novels at age 13, and after a few years writing screenplays, comic books and fan-fiction, she wrote Night Life, her debut novel. She is the proud owner of an English degree, two cats, a morbid imagination, a taste for black clothing, punk rock, and comic books. She’s lucky enough to write full time and watches far too many trashy horror movies.  She lives in Olympia, Washington.

“I loved the mystery and the smart, gutsy heroine.” —Karen Chance, New York Times bestselling author of Claimed by Shadow

“Don't go to bed with this book--it will keep you up all night. It's that good.” —Lilith Saintcrow, national bestselling author of Working for the Devil

“Luna is tough, smart, and fierce, hiding a conflicted and insecure nature behind her drive for justice and independence, without falling into cliché. It's also just a lot of fun to read.” —Kat Richardson

“Fast-paced, sexy and witty with many more interesting characters than I have time to mention. I'm looking forward to reading more stories in the exciting Nocturne City series.” —Fresh Fiction

“Wow, I am still thinking about this book. The last time I reacted to a book this way, it was the first Mercy Thompson book by Patricia Briggs. If you are looking for a book that seamlessly blends a police procedural with a paranormal, go out and get this book” —Night Owl Reviews

“A tense, gritty urban fantasy that grips the audience from the onset.” —The Mystery Gazette

“Night Life dives right into the action, and carried me along for the ride…If the following books are written with the same care and interest as Night Life, they will be a welcome addition to this fantasy genre.” —Arm Chair Interviews