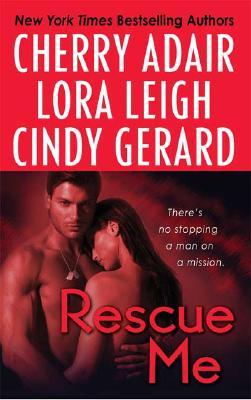 When Dr. Elizabeth Goodall is kidnapped and held captive in the African jungle, her only hope for rescue is counterterrorist operative Sam Pelton. But to escape from a brutal warlord, they must confront a powerful attraction that could prove more treacherous than the wilds of the jungle…

Em Delaney has wanted bad-boy Macey March for as long as she can remember. But as a Navy SEAL under the command of her overprotective godfather, Macey is off-limits to Em…until a kidnapping attempt forces them to share tantalizingly close quarters—and a forbidden desire.

Assistant D.A. Elena Martinez never wanted to fall for police detective Seth King. When they are teamed up on a charity hike in the Grand Canyon, however, their chemistry sizzles under the desert sun. But a vengeful drug lord is determined not to let them survive the canyon with their lives—and love—intact…

New York Times bestselling author Cherry Adair has carved a niche for herself with her sexy, sassy, fast-paced, action adventure novels which have appeared on numerous bestsellers lists, won dozens of awards and garnered praise from reviewers and fans alike.  She hates first drafts, has a passion for mentoring unpublished writers, and is hard at work on two new series – CUTTER CAY and LODESTONE.

Cindy Gerard is a New York Times bestselling author of many contemporary romance novels including To the Brink, To the Edge, To the Limit, Over the Line, Under the Wire, and Into the Dark (all available from St. Martin’s Press). She is also the author of the Black Ops, Inc. series, every one of which has appeared on The New York Times top 20 list. Along with numerous industry award nominations, Cindy is the recipient of The National Reader’s Choice Award and two-time winner of Romance Writers of America’s coveted RITA Award.

“Riveting suspense and out-of-control desires are perfectly combined in Rescue Me, where unanticipated escapades and unspoken yearnings abound.” —Single Titles