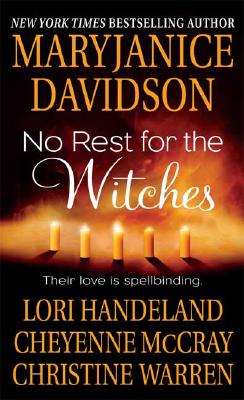 No Rest for the Witches (Mass Market Paperback)

MaryJanice Davidson
“The Majicka”
Life’s a bit crowded for Ireland and her roommates—a fairy, a werewolf, a vampire, and now a zombie…especially when a mysterious man walks through the door. Will there be any room left for love?

Lori Handeland
“Voodoo Moon”
For Devil’s Fork–based FBI Agent Dana Duran, the only way to fight a supernatural serial killer just may be to embrace life. But little did she know that voodoo could be so viciously sexy…

Cheyenne McCray
“Breath of Magic”
San Francisco’s witches are in an epic battle. But even if Sydney can use her sultry ways and ancient Druid powers to save the world, can she risk losing her heart to handsome warrior Conlan?

Christine Warren
“Any Witch Way She Can”
A desperately lonely witch decides to take matters of love into her own hands when she casts a cosmic personal ad…only to find that the perfect formula for love is a strange brew indeed.

MaryJanice Davidson has been credited with starting paranormal chick lit. She is the author of the Undead series and "Me, Myself and Why?" Her books have been listed on the "New York Times" and "USA Today" bestseller lists, and she lists her goals as "Working for world peace, figuring out how to make potstickers, and speaking at writer and reader conferences around the world." She lives in Minnesota. "New York Times" and "USA Today" bestselling author Cheyenne McCray writes the Night Tracker novels and the Armed and Dangerous series, among others. She grew up on a ranch in southeastern Arizona. She has been writing ever since she can remember, back to her kindergarten days when she penned her first poem. She always knew one day she would write novels--she wanted to create worlds that readers would get lost in, just as she had always gotten lost in her favorite books. "Growing up I read, read, and read," she says, "and grew up to write, write, write." She has three sons and two dogs. A true Arizona native, she loves the desert and all of the sunshine and beautiful sunsets that go along with it.

Christine Warren is the bestselling author of The Others series, including "Wolf at the Door," "Big Bad Wolf," "Born to Be Wild," "Prince Charming Doesn't Live Here," and "Black Magic Woman." Born and raised in coastal New England, she now lives as a transplant in the Pacific Northwest. (She completely bypassed those states in the middle due to her phobia of being landlocked.) When not writing, she enjoys horseback riding, playing with her pets, identifying dogs from photos of their underbellies, and most of all reading things someone else had to agonize over.

Lori Handeland is the "USA Today" and "New York Times" bestselling author of the Nightcreature Novels, including "Moon Cursed" and "Crave the Moon," as well as "The Phoenix Chronicles "and "Shakespeare Undead." She is the recipient of many industry awards, including two RITA awards, a "Romantic Times" Award for Best Harlequin Superromance, and the Prism Award from Romance Writers of America. She lives in Wisconsin with her family and a yellow lab named Ellwood.

Praise For No Rest for the Witches…

"It would be tough to find a more talented or sizzling group of authors than this outstanding quartet... No question, these paranormal mavens deliver top-notch supernatural thrills!" -- RT Book Review