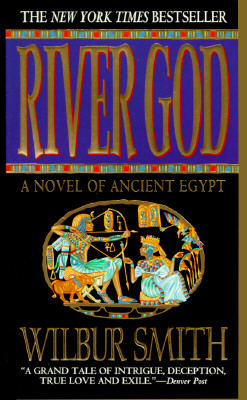 For Tanus, the fair-haired young lion of a warrior, the gods have decreed that he will lead Egypt's army in a bold attempt to reunite the Kingdom's shared halves. But Tanus will have to defy the same gods to attain the reward they have forbidden him, an object more prized than battle's glory: possession of the Lady Lostris, a rare beauty with skin the color of oiled ceder--destined for the adoration of a nation, and the love of one extraordinary man.

International bestselling author Wilbur Smith, creator of two dozen highly acclaimed novels, draws readers into a magnificent, richly imagined saga. Exploding with all the drama, mystery and rage of a bygone time, River God is a masterpiece from a storyteller at the height of his powers.


Praise For River God: A Novel of Ancient Egypt…

"Vivid and fascinating...Packed with passion, war, intrigue and revenge."--Orlando Sentinel

Wilbur Smith was born in Central Africa. He has written thirty novels, all meticulously researched on his numerous expeditions worldwide. His books are now translated into twenty-six languages and have sold over 110 million copies.
Loading...
or
Not Currently Available for Direct Purchase