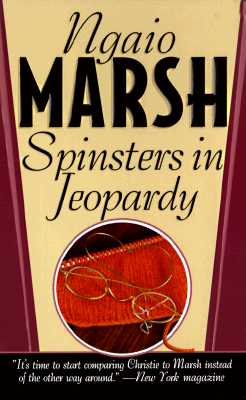 An exotic end for an English spinster

En route to a family vacation on the French Riviera, Inspector Roderick Alleyn glimpses from the train a shocking tableau. In a moonlit window a white-robed figure raises a knife to a woman's shadow. Thus begins his incognito exploration of the Chateau of the Silver Goat...where a jet-set cult's 'Way of Life' could spell death for a maiden lady of a certain age-and even for Alleyn's own young son unless he can unveil its illicit mysteries...

From her first book in 1934 to her final volume just before her death in 1982, Ngaio Marsh's work has remained legendary, and is often compared to that of Agatha Christie and Dorothy L. Sayers. During her celebrated fifty-year career, Marsh was made a Grand Master by the Mystery Writers of America, was named Dame Commander, Order of the British Empire, won numerous prestigious awards, and penned 32 mystery novels.

Now St. Martin's Dead Letter Mysteries is thrilled to make all of Marsh's novels available again for old fans to relish and new ones to discover. So sit back, draw the curtains, lock the doors, and put yourself in the hands of Grande Dame of detective novels...

Praise For Spinsters in Jeopardy…

"It's time to start comparing Christie to Marsh instead of the other way around." --New York magazine