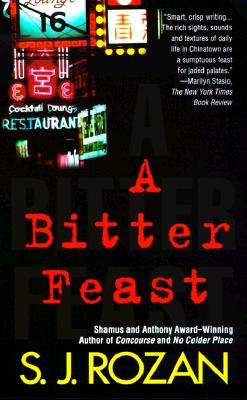 Joining the company of Sue Grafton, Jonathan Kellerman, and Patricia Cornwell, Shamus Award-winner S.J. Rozan now owns a coveted Anthony Award for Best Novel for her No Colder Place. The Washington Post has called her Bill Smith/Lydia Chin novels...a series to watch for....Booklist deemed Rozan....a major figure in contemporary mystery fiction...Now it's your turn--to discover one of fiction's major voices and to fall in love with a mystery of evocative atmosphere, engaging characters, and exquisite writing.

It's Lydia Chin's turn to go underground as the Chinese-American P.I. investigates a case that strikes at the heart of Chinatown's dangerously shifting power structure. Four restaurant workers, including a union organizer, have disappeared, and the union's lawyer hires Lydia to find them. But when a bomb shatters the Chinese Restaurant Workers' Union headquarters, killing one of the missing men and injuring the lawyer, Lydia is summoned by the prime suspect, one of Chinatown's most powerful men, to continue the search--on his payroll. With backup from her partner Bill Smith, Lydia goes undercover as a dim sum waitress, slinging steamed dumplings while dodging a lethal conflict between the old and the new orders, and searching for the missing waiters and their deadly secret--before someone serves them their last supper

S. J. Rozan is the author of many critically acclaimed novels and has won most of crime fiction's greatest honors, including the Edgar, Shamus, Anthony, Macavity, and Nero Awards. She lives in New York.

Praise For A Bitter Feast: A Bill Smith/Lydia Chin Novel…

"You couldn't ask for better company than Lydia." --Seattle Times/Post-Intelligencer

"Superlative...a story that manages to satisfy all the senses." --Publishers Weekly (starred review)

"Rozan skillfully measures out the layers of double-dealing, keeping her plot just twisty enough to spin it out with consummate professionalism. If you still don't know Lydia and Bill, you'll never have a better chance to meet them." --Kirkus (starred review)