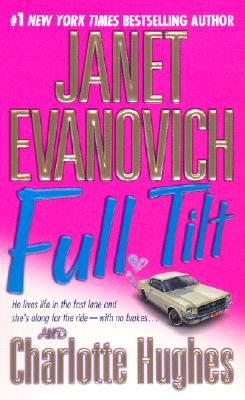 He lives life in the fast lane and she's along for the ride-with no brakes....

Jamie Swift has one priority in quiet Beaumont, South Carolina: running the local newspaper. Romance runs second. But with the arrival of her silent partner, the notoriously mysterious and sexy Maximillian Holt, Jamie's life gets shaken up. Max claims he's here to give his brother-in-law a vote of confidence. A former wrestler, Frankie Fontana's now taking his shots in the political ring. Beaumont could use a mayor with scruples, but what it gets is a crime-and what Jamie gets is a story that's taking her for a ride on the wild side, complete with two assassins, a washed-up stripper, and an insane poacher. Between a spray of bullets and a fast getaway could it get any more romantic-or dangerous? Max and Jamie are betting their lives on a long shot.

Janet Evanovich is the author of the Stephanie Plum books, including "One for the Money" and "Sizzling Sixteen," and the Diesel & Tucker series, including "Wicked Appetite." Janet studied painting at Douglass College, but that art form never quite fit, and she soon moved on to writing stories. She didn't have instant success: she collected a big box of rejection letters. As she puts it, "When the box was full I burned the whole damn thing, crammed myself into pantyhose and went to work for a temp agency." But after a few months of secretarial work, she managed to sell her first novel for $2,000. She immediately quit her job and started working full-time as a writer. After 12 romance novels, she switched to mystery, and created Stephanie Plum. The rest is history. Janet's favorite exercise is shopping, and her drug of choice is Cheeze Doodles. She and her husband live in New Hampshire, in house with a view of the Connecticut River Valley.Charlotte Hughes was raised in the South, the oldest and only daughter of three children. She is the author of the novels "What Looks Like Crazy" and "High Anxiety." She lives in Beaufort, South Carolina.