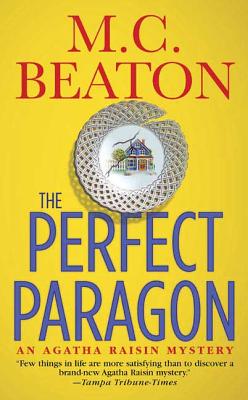 AGATHA RAISIN...AND THE CASE FROM HELL She's nosed in on murder investigations, annoyed law enforcement on two continents, and been targeted by everyone from a hit man to a killer secretary. But now Agatha Raisin must take on her greatest nightmare a divorce case. Bad enough that her struggling detective agency needs the whacking great fee pompous businessman Robert Smedley is offering to prove his wife is unfaithful; it's even worse that Mrs. Smedley is the kind of sweet, accomplished, lovely, gentle, and all-around perfectly wonderful spouse that Agatha couldn't be in a thousand years. So, when Smedley turns up poisoned, Agatha is relieved enough to help his now-desperate wife clear her name. And with the assistance of her firm's eccentric new staff, Agatha enthusiastically follows leads and a batch of suspects through the English countryside's seediest byways. But the police aren't about to let an interfering "amateur" beat them to the punch. And as Agatha hits one dead end after another, a particularly devious killer is looking forward to making sure the indomitable Agatha never has to worry about old age or anything else.


Praise For The Perfect Paragon…

"Though Agatha is still a bit of a piece of work, she is mellowing with age, and in this book even forgets to 'gussy' herself up once when she goes out. There's a cliffhanger at the end...that is going to be interesting in the next book."--Deadly Pleasures

"This is the latest perfectly precious prose problem from Beaton, Britain's successor to Dame Agatha Christie. If you've never read an Agatha Raisin novel, it's time to start, and you'll have fifteen more of these confections awaiting you. Polish those off, and you still have a batch of Hamish Macbeth tales. All of them are cunningly plotted, beautifully written and more fun you can imagine. The Perfect Paragon is as perfect as all the others, and you won't figure out whodunit until the final pages."--The Globe & Mail

"Fabulous…M.C. Beaton is at her best with this fine tale filled with twists."
--Midwest Book Review

M. C. Beaton has been hailed as "the new Queen of Crime." She is The New York Times bestselling author of the Agatha Raisin mysteries, including As the Pig Turns and Busy Body, set in the English Cotswolds, as well as the Hamish Macbeth mysteries set in Scotland. She has also written historical romance novels and an Edwardian mystery series under the name Marion Chesney. Before writing her first novels, Beaton worked as a bookseller, a newspaper reporter, a fashion critic, and a waitress in a greasy spoon. Born in Scotland, she currently divides her time between Paris and a village in the Cotswolds. She was selected the British Guest of Honor for the Bouchercon World Mystery Convention in 2006.
Loading...
or
Not Currently Available for Direct Purchase