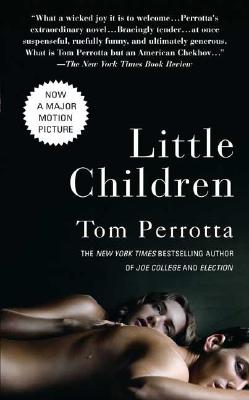 Tom Perrotta's thirty-ish parents of young children are a varied and surprising bunch. There's Todd, the handsome stay-at-home dad dubbed "The Prom King" by the moms at the playground, and his wife Kathy, a documentary filmmaker envious of the connection Todd has forged with their toddler son. And there's Sarah, a lapsed feminist surprised to find she's become a typical wife in a traditional marriage, and her husband Richard, who is more and more involved with an internet fantasy life than with his own wife and child. And then there's Mary Ann, who has life all figured out, down to a scheduled roll in the hay with her husband every Tuesday at 9PM.

They all raise their kids in the kind of quiet suburb where nothing ever seems to happen--until one eventful summer, when a convicted child molester moves back to town, and two parents begin an affair that goes further than either of them could ever have imagined.

"A great book…I was enthralled by every page."
--Dennis Lehane, author of Mystic River and Shutter Island

Praise for TOM PERROTTA AND HIS NOVELS

"Tom Perrotta has to be considered one of our true genius satirists. Little Children is a great book. It's both an indictment of and an elegy to that odd sociological construct known as suburban America. I was enthralled by every page, and damn if I didn't find myself wishing I'd written it."
--Dennis Lehane, author of Mystic River and Shutter Island

TOM PERROTTA is the author of several works of fiction, including JOE COLLEGE and ELECTION, which was made into the acclaimed 1999 movie starring Reese Witherspoon and Matthew Broderick. He lives with his wife and two children in Belmont, Massachusetts.
Loading...
or
Not Currently Available for Direct Purchase