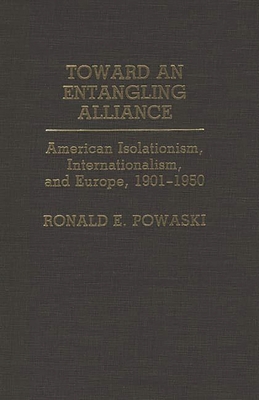 Toward an Entangling Alliance

Conceived with a dedication to manifest destiny, individual freedom, and opportunity, the United States, from its inception, made an effort to avoid political or military involvement in Europe which could conflict with its pursuit of those goals. Ronald E. Powaski's study analyzes why the United States pursued this isolationist policy, and the factors, events, and personalities which challenged it and finally necessitated its abandonment.

Powaski's chronological approach to the topic begins with historical background material which identifies the origins of isolationism as a natural outgrowth of colonial ideals. The major portion of the text is devoted to how the political, military, and economic upheavals of the twentieth century gradually forced the United States to reevaluate its isolationist policy, ultimately reaffirming its original ideals through continuing involvement in world peace organizations. A list of suggested reading and a full index complete this work.