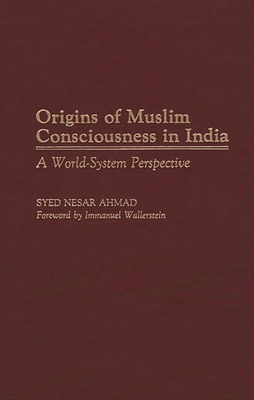 Origins of Muslim Consciousness in India

The debate over the underlying causes of the clash between Hindus and Muslims which continues to polarize India is the central concern of this volume. Syed Nesar Ahmad challenges popular viewpoints regarding the Hindu-Muslim conflict by asserting that, although instrinsic differences between the two cultures do exist and this schism has been somewhat fueled by the cultural conditions in colonial India, the emergence and growth of the conflict is primarily the result of social and economic forces, both global and regional, that has caused the initial differences to intensify into cultural rift.

Ahmad presents a thorough account of Indian history during the 19th and 20th centuries, analyzing how the relationship between Hindus and Muslims has been shaped by each significant political and social development. Evidence of both selectivism and assimilation between Hindus and Muslims, a concept not previously accepted, is apparent throughout the history, and the issue of the origins of the identity of the Muslim consciousness which now exerts such influence in the region is explained in terms of the interaction of religious, social, cultural, and global factors. By viewing India's struggle for its post-colonial identity from this comprehensive historical perspective, this work illuminates some of the fundamental causes of similar conflicts throughout the former colonial world.

SYED NESAR AHMAD taught in Pakistan, Canada, and the United States before receiving his doctoral degree in Sociology from SUNY, Binghamton. He was killed in a hijacking in Pakistan on September 5, 1986, while returning from the World Sociology Congress in New Delhi. Ahmad published numerous articles on third world development, the Middle East, and South Asia in such journals as Review, Third World Forum, Pakistan Forum, and the McGill Daily newspaper. He also contributed chapters to a variety of books on political economy. At the time of his death he was a faculty member at Friends World College in Long Island, New York.
Loading...
or support indie stores by buying on