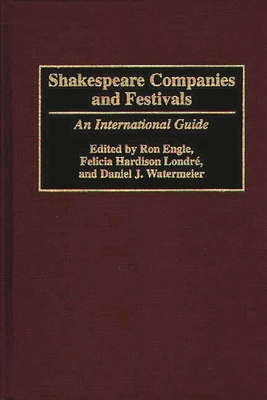 Though first performed some 400 years ago, the plays of William Shakespeare still continue to capture the popular imagination and are produced by numerous companies around the world. This reference describes over 140 Shakespeare companies and festivals worldwide. Each company or festival is profiled in a separate entry. Entries are grouped in chapters devoted to particular states or countries, and provide historical, organizational, demographic, and production information.

Each profile describes the history of the festival or company; its organization, including staffing and budgeting; its physical facilities and performance site; the demographics of its audience and the community where it is located; and the company's or festival's approach to producing Shakespeare's plays. Each entry begins with a headnote providing essential information, such as the name, address, box office phone number, length of season, principal staff members, facilities, annual attendance, and budget. Each closes with a chronological listing of all Shakespeare's plays produced by the organization, and resources for further information.