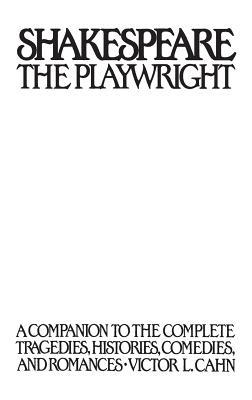 A Companion to the Complete Tragedies, Histories, Comedies, and Romances

A useful guide for the general reader, as well as high school and undergraduate students, to Shakespeare's 37 plays. After a brief introduction outlining Shakespeare's life and career, Cahn carefully guides the reader through each play in turn, from first scene to last, using a mixture of quotation, paraphrase, and critical comment. His style is accessible and unpretentious, and his insights into the psychological consistency' of Shakespeare's characters--the main focus of the commentary--are stimulating and sometimes provocative. Library Journal

Contending that the fundamental appeal of Shakespeare's work lies with his characters, Cahn systematically proceeds through a discussion of each play (within the traditional categories of tragedy, history, and romance) as if an audience were encountering that play for the first time. . . . This critical appreciation approach differentiates Cahn's companion/handbook from other Shakespeareana . . . in which the intention is to assemble a body of Shakespearean lore for information. In Cahn's work, suggestions for further reading (usually a short list of the prominent, old studies) follows each analysis. Two appendixes (The Two Noble Kinsmen and a who's who of the Royal Figures are provided. A one-page select bibliography, a character index, and a general index end the book. It is highly recommended for any general public library and for academic collections at all undergraduate levels. Choice

Since their first production four centuries ago, the plays of William Shakespeare have been the most widely produced, popularly acclaimed, and critically examined works in the world's literature. In this unique book, Victor L. Cahn, an acclaimed teacher of drama, guides the reader scene by scene through each of Shakespeare's thirty-seven plays, recreating the freshness and theatrical effect of performance. Cahn has based his approach on the assumption that the fundamental appeal of Shakespeare's plays lies in the characters, and with clarity and subtlety he focuses on how the implications of the characters' actions and the nuances of their language contribute to the plays' impact.

The introduction briefly traces Shakespeare's life and career, and explains some of the social and artistic circumstances that influenced his work. The plays are grouped by genre: Tragedies, Histories, Comedies, and Romances. This structure allows Cahn to explore Shakespeare's development in all four dramatic forms, as well as to suggest relationships between characters, themes, and images throughout the works. In addition, Cahn discusses the plays as reflective of Shakespeare's age, particularly the Renaissance concern with the tension between individual rights and social responsibility. The text is free from extensive scholarly apparatus, but valuable suggestions for further reading follow the analysis of each play, and a selected bibliography concludes the volume. The comprehensiveness of the book, as well as the accessibility and quality of its interpretations, make it a valuable resource for courses in Shakespeare, drama, and British literature, and a worthy addition to high school, college, university, and public library reference collections.

VICTOR L. CAHN is Professor of English at Skidmore College. He teaches courses in Shakespeare and modern drama and is the author of four books and several plays. His numerous articles and reviews have appeared in such diverse publications as Modern Drama, The Literary Review, The New York Times, and Variety.
Loading...
or support indie stores by buying on