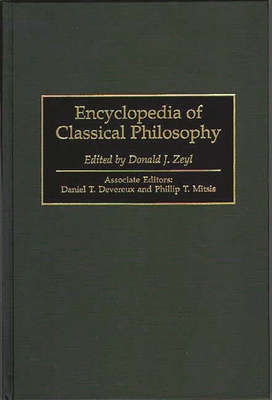 The only encyclopedia in English specific to the field of Classical Philosophy, this work presents 270 articles on major and minor figures and on topics of importance to the philosophy of Greek and Roman antiquity. The articles present not only succinct historical accounts of their subject matter, but they introduce readers to issues of interpretation and debate in the contemporary scholarly study of the philosophy of the Classical period. Scholars, students, and interested lay persons will find this volume useful in gaining a comprehensive view of the field. The contributors, representing three continents, are themselves leading scholars of international stature.

Topical articles survey areas traditional to philosophy, such as epistemology, ethics, philosophy of mind, and political thought. Some topical articles focus on specific philosophical concepts and related problems, surveying discussion and debate among the ancient thinkers from the Presocratics to the Neoplatonists. Other articles trace the history of philosophical schools; still others focus on disciplines now distinguished from philosophy, such as science, mathematics, and medicine. The majority of the articles, however, focus on individual thinkers and their contributions to the traditions of philosophical thought in antiquity.

DONALD J. ZEYL is Professor of Philosophy at the University of Rhode Island. He has published several articles on Socratic moral theory and is the translator of Plato's Gorgias and Timaeus. His teaching interests are in ancient philosophy and the philosophy of religion.
Loading...
or support indie stores by buying on