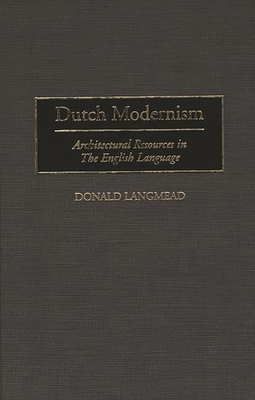 A critical guide to the English-language literature, Dutch Modernism demonstrates the importance of the Dutch contribution to 20th-century architecture. Holland's valuable role in the creation of modernism (1900-1940) was all but ignored until 30 years ago; it is significant that more than a third of the English-language literature has appeared since 1975. This guide is comprehensive; it summarizes, describes, and evaluates 1,250 references in the light of contemporary theory and practice. This work is of interest to scholars, students, and practitioners.

The introduction outlines Holland's unique place in the development of international Modernism, 1900-1940, and explores the phenomenon of its eventual recognition in Britain and the United States. Although not an exhaustive study, this work presents all the areas of study and helpfully evaluates most entries, saving the user time and energy. A number of Dutch publications have been included, some because they are seminal theoretical works and others because they are rich in images. As a guide to English-language sources, Dutch Modernism reaches a wider audience than earlier Dutch and Italian bibliographies.

DONALD LANGMEAD is Associate Professor and Director of Research in the Faculty of Art, Architecture, and Design at the University of South Australia. He studied architectural history in England and Holland. He is the author of Willem Marinus Dudok, A Dutch Modernist (Greenwood, 1996) and coauthor (with Donald Leslie Johnson) of Makers of 20th-Century Modern Architecture (Greenwood, 1996), among other publications.
or
Buy Here
Copyright © 2020 American Booksellers Association