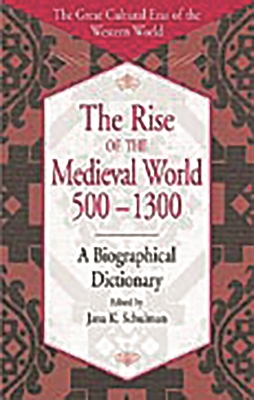 A Biographical Dictionary (Great Cultural Eras of the Western World)

Beginning in 500 with the fusion of classical, Christian, and Germanic cultures and ending in 1300 with a Europe united by a desire for growth, knowledge, and change, this volume provides basic information on the significant cultural figures of the Middle Ages. It includes over 400 people whose contributions in literature, religion, philosophy, education, or politics influenced the development and culture of the Medieval world. While focusing on Western European figures, the book does not neglect those from Byzantium, Baghdad, and the Arab world who also contributed to the politics, religion, and culture of Western Europe.

Europe underwent fundamental changes during the Middle Ages. It changed from a preliterate to a literate society. Cities became a vital part of the economy, culture, and social structure. The poor and serfs went to the cities. The devout joined monastic orders. Christianity spread throughout Europe, while a man was born in Mecca who would change the shape of the religious map. Islam spread throughout the Holy Land. Christian piety led to the Crusades. This book provides a convenient guide to those who helped shape these movements and counter-movements during this era that would pave the way for the Renaissance.

JANA K. SCHULMAN is Associate Professor of English at Western Michigan University, where she teaches Old English, History of the English language, and courses on Ancient and Medieval epics./e
Loading...
or support indie stores by buying on