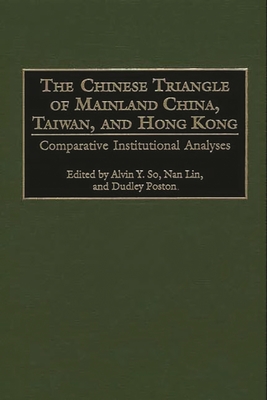 The Chinese triangle of mainland China, Hong Kong, and Taiwan constitutes one of the most dynamic regions in the world economy. Since the late 1970s, these three societies have experienced increasing economic integration; however, studies aimed at analyzing and explaining this integration have often overlooked the very important role social institutions have played in the shaping of this process. To fill this gap, this book adopts a systematic institutional approach designed to examine the different patterns of institutions in the three countries and to discuss how such social institutions as the economy, gender, social networks, and the Chinese diaspora have exerted a profound impact on all three societies. The chapters, taken together, argue that different patterns of institutional configuration have led to divergent paths of development, and that this divergence will have significant implications on the prospects for Chinese national reunification in the twenty-first century.

Alvin Y. So is professor and head of the Division of Social Science at the Hong Kong University of Science and Technology. His recent books include Hong Kong's Embattled Democracy and Asia's Environmental Movements.Nan Lin is professor of sociology at Duke University. Tunghai University, Taiwan, received his MA from Syracuse University, and finished his PhD at Michigan State University in 1966. He has published many books and articles.Dudley Poston is Samuel Rhea Gammon professor of liberal arts at Texas A & M University. He was the President of the North American Chinese Sociologists Association. He has published numerous books and articles on Chinese population.
or support indie stores by buying on
Copyright © 2020 American Booksellers Association