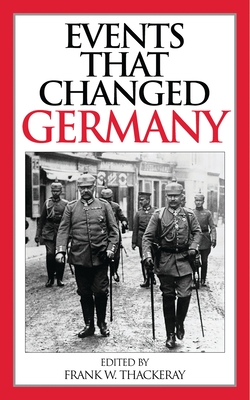 Since the middle of the 19th century, Germany has found itself variously engaged at the vanguard of the Industrial Age, at the heart of the European nationalistic contest, as the birthplace of the Holocaust and World War II, and as the symbolic setting of the Soviet Union's fall; but wherever one places Germany's foremost significance today, there is no denying the fact that an understanding of German history over the past 150 years is central to an understanding of Europe over that same period. Germany's persistent struggle to create and uphold a unified nation within its ever-shifting borders has impacted at one time or another almost every corner of Europe. Editor Frank Thackeray, with the ten essays included in this volume, has put forth an excellent aid for students and general readers alike interested in learning what Germany is, who it was, and what the factors were that led to its several modern manifestations upon the world's stage.

Ten topical chapters on the following selected events are included in this volume: The Revolutions of 1848, 1848-1849; The Unification of Germany; Industrialization; The Pursuit of Weltpolitik; World War I; The Collapse of the Weimar Republic; The Hitler Experience; World War II; West Germany's Economic and Political Miracle; and The Reunification of Germany. Also included in this volume are a timeline of major events, supplementary illustrations, and introductions that present relevant factual material for the topical chapters in a clear, concise, chronological order. Selected bibliographies follow every chapter, and two appendices complete the work--one containing a glossary of names, events, organizations, and terms beyond the glossary, and the other containing a statistical compendium of elections from 1871 to 2003. Events That Changed Germany since 1848 is part of the History of the Modern Nations series.

FRANK W. THACKERAY is Professor of History at Indiana University Southeast. He is author of Antecedents of Revolution: Alexander I and the Polish Kingdom (1980) and the co-editor (with John E. Findling) of the Events That Changed the World series and the Events That Changed America series, both published by Greenwood. Also with John E. Findling, he is co-editor of Statesmen Who Changed the World (1993). He and Findling are also series editors of the Greenwood Histories of the Modern Nations series.
Loading...
or
Not Currently Available for Direct Purchase