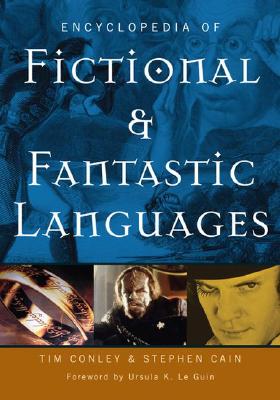 Fictional languages are central to numerous creative works. This book examines such languages in a wide range of literature, films, and television shows. Included are alphabetically arranged entries on particular works. Many of these works are widely taught, such as All's Well That Ends Well, Gulliver's Travels, Nineteen Eighty-Four, and Utopia, while others are popular books, films, and television series, such as Buffy the Vampire Slayer, Cat's Cradle, The Lord of the Rings, and Star Wars. Thus the encyclopedia helps students understand texts central to the curriculum and popular culture. Each entry discusses the role of imaginary languages in a particular work. Entries range from antiquity to the present and close with suggestions for further reading. The encyclopedia ends with a selected bibliography and includes various helpful finding aids.

Some of the most popular creative works are appealing because of the artificial worlds their authors create. In many of these works, fictional languages are essential to the setting and plot, and often help the author comment on social issues. This encyclopedia examines fictional and fantastic languages in a broad range of literature, films, and television shows.

Each entry discusses the features of the invented language central to the work and relates it to the film, literary text, or television program. Entries provide suggestions for further reading, and the Encyclopedia closes with a selected bibliography. Because many of the works discussed are central to the curriculum, the Encyclopedia will help students understand these texts and the importance of language. At the same time, the volume's coverage of popular books, films, and television series invites students to explore more critically those works that are most likely to interest them.

Tim Conley is Assistant Professor of English and Comparative Literature at Brock University. he is the author of Joyces Mistakes: Problems of Intention, Irony, and Interpretation (2003), and of a collection of short fiction, Whatever Happens (2006). His essays have appeared in such journals as Comparative Literature, James Joyce Quarterly, Papers on Language and Literature, and Studies in the Novel.Stephen Cain is Assistant Professor of English at York University. He has published on such topics as experimental poetry and music, the politics of publishing, and poetics. His work has appeared in Studies in Canadian Literature, Open Letter, and other journals. His three books of poetry include American Standard/Canada Dry (2005), Torontology (2001), and Dyslexicon (1999).
or support indie stores by buying on
Copyright © 2020 American Booksellers Association