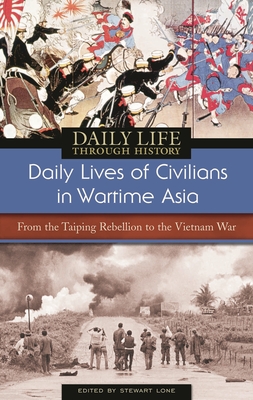 In this detailed account of civilian lives during wartime in Asia, high school students, undergrads, and general readers alike can get a glimpse into the often dismal, but surprisingly resilient, lives led by ordinary people-those who did not go off to war but were powerfully affected by it nonetheless. How did people live on a day-to-day basis with the cruelty and horror of war right outside their doorsteps? What were the reactions and views of those who did not fight on the fields? How did people come together to cope with the losses of loved ones and the sacrifices they had to make on a daily basis? This volume contains accounts from the resilient civilians who lived in Asia during the Taiping and Nian Rebellions, the Philippine Revolution, the Wars of Meiji Japan, World War II, the Korean War, and the Vietnam War.

This volume begins with R.G. Tiedemann's account of life in China in the mid-nineteenth century, during the Taiping and Nian Rebellions. Tiedemann examines social practices imposed on the civilians by the Taiping, life in the cities and country, women, and the militarization of society. Bernardita Reyes Churchill examines how civilians in the Philippines struggled for freedom under the imperial reign Spain and the United States at the turn of the twentieth century. Stewart Lone looks at how Meiji Japan's wars on the Asian continent affected the lives and routines of men, women, and children, urban and rural. He also explains how the media played a role during the wars, as well as how people were able to spend leisure time and even make wartime humor. Di Wang uses the public space of the teahouse and its culture as a microcosm of daily life in China during tumultuous years of civil and world war, 1937-1949. Simon Partner explores Japanese daily life during World War II, investigating youth culture, the ways people came together, and how the government took control of their lives by rationing food, clothing, and other resources. Shigeru Sato continues by examining the harshness of life in Indonesia during World War II and its aftermath. Korean life from 1950-1953 is looked at by Andrei Lankov, who takes a look at the heart-rending lives of refugees. Finally, Lone surveys life in South Vietnam from 1965-1975, from school children to youth protests to how propaganda affected civilians. This volume offers students and general readers a glimpse into the lives of those often forgotten.

STEWART LONE is Professor of modern Northeast Asian social history, University of New South Wales (campus at The Australian Defense Force Academy). He is the author of Korea Since 1850 (1993), Japan's First Modern War (1994), Army, Empire and Politics in Meiji Japan (2000), and The Japanese Community in Brazil 1908-1940.
or
Buy Here
Copyright © 2020 American Booksellers Association