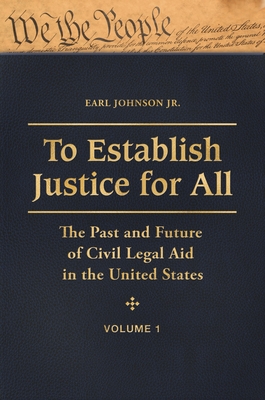 To Establish Justice for All [3 Volumes]

American statesman Sargent Shriver called the Legal Services Program the "most important" of all the War on Poverty programs he started; American Bar Association president Edward Kuhn said its creation was the most important development in the history of the legal profession. Earl Johnson Jr., a former director of the War on Poverty's Legal Services Program, provides a vivid account of the entire history of civil legal aid from its inception in 1876 to the current day. The first to capture the full story of the dramatic, ongoing struggle to bring equal justice to those unable to afford a lawyer, this monumental three-volume work covers the personalities and events leading to a national legal aid movement--and decades later, the federal government's entry into the field, and its creation of a unique institution, an independent Legal Services Corporation, to run the program. The narrative also covers the landmark court victories the attorneys won and the political controversies those cases generated, along with the heated congressional battles over the shape and survival of the Legal Services Corporation. In the final chapters, the author assesses the current state of civil legal aid and its future prospects in the United States.

Earl Johnson Jr., JD, LLM, is a retired Justice of the California Court of Appeal, a former professor of law at the University of Southern California, and a former director of the Office of Economic Opportunity's Legal Services Program.
Loading...
or
Not Currently Available for Direct Purchase