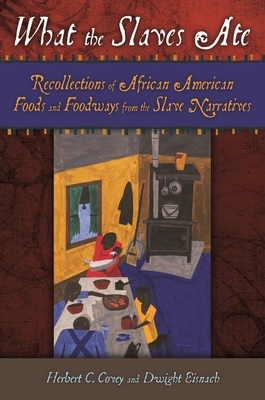 What the Slaves Ate

Recollections of African American Foods and Foodways from the Slave Narratives

Carefully documenting African American slave foods, this book reveals that slaves actively developed their own foodways-their customs involving family and food. The authors connect African foods and food preparation to the development during slavery of Southern cuisines having African influences, including Cajun, Creole, and what later became known as soul food, drawing on the recollections of ex-slaves recorded by Works Progress Administration interviewers. Valuable for its fascinating look into the very core of slave life, this book makes a unique contribution to our knowledge of slave culture and of the complex power relations encoded in both owners' manipulation of food as a method of slave control and slaves' efforts to evade and undermine that control.

While a number of scholars have discussed slaves and their foods, slave foodways remains a relatively unexplored topic. The authors' findings also augment existing knowledge about slave nutrition while documenting new information about slave diets.

Herbert C. Covey is the author of African American Slave Medicine: Herbal and Non-Herbal Treatments (2007) as well as of numerous books and articles on juvenile gangs and on drug addiction. He has been Vice Chair of the Colorado State Juvenile Parole Board since 1994 and Field Administrator for the Colorado Department of Human Services since 1999.Dwight Eisnach is an independent scholar and editor. He began his career as an investigative reporter and later served the Colorado Department of Human Services for some 25 years, successively as Legislative Liaison, Public Information Officer, and Administrator of the Colorado Juvenile Parole Board.
Loading...
or support indie stores by buying on