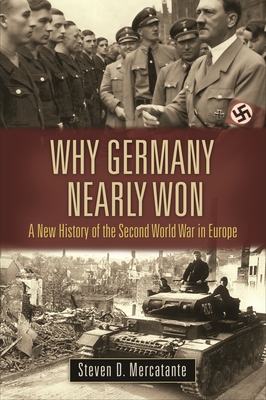 A New History of the Second World War in Europe

Why Germany Nearly Won: A New History of the Second World War in Europe challenges this conventional wisdom in highlighting how the re-establishment of the traditional German art of war--updated to accommodate new weapons systems--paved the way for Germany to forge a considerable military edge over its much larger potential rivals by playing to its qualitative strengths as a continental power. Ironically, these methodologies also created and exacerbated internal contradictions that undermined the same war machine and left it vulnerable to enemies with the capacity to adapt and build on potent military traditions of their own.

The book begins by examining topics such as the methods by which the German economy and military prepared for war, the German military establishment's formidable strengths, and its weaknesses. The book then takes an entirely new perspective on explaining the Second World War in Europe. It demonstrates how Germany, through its invasion of the Soviet Union, came within a whisker of cementing a European-based empire that would have allowed the Third Reich to challenge the Anglo-American alliance for global hegemony--an outcome that by commonly cited measures of military potential Germany never should have had even a remote chance of accomplishing. The book's last section explores the final year of the war and addresses how Germany was able to hang on against the world's most powerful nations working in concert to engineer its defeat.

Steven D. Mercatante is the founder and editor-in-chief of The Globe at War, a website focused on exploring World War II.
Loading...
or support indie stores by buying on