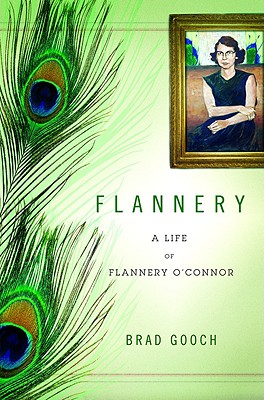 A Life of Flannery O'Connor

The landscape of American literature was fundamentally changed when Flannery O'Connor stepped onto the scene with her first published book, Wise Blood, in 1952. Her fierce, sometimes comic novels and stories reflected the darkly funny, vibrant, and theologically sophisticated woman who wrote them. Brad Gooch brings to life O'Connor's significant friendships -- with Robert Lowell, Elizabeth Hardwick, Walker Percy, and James Dickey among others -- and her deeply felt convictions, as expressed in her communications with Thomas Merton, Elizabeth Bishop, and Betty Hester. Hester was famously known as "A" in O'Connor's collected letters, The Habit of Being, and a large cache of correspondence to her from O'Connor was made available to scholars, including Brad Gooch, in 2006. O'Connor's capacity to live fully -- despite the chronic disease that eventually confined her to her mother's farm in Georgia -- is illuminated in this engaging and authoritative biography.

"Flannery O'Connor, one of the best American writers of short fiction, has found her ideal biographer in Brad Gooch. With elegance and fairness, Gooch deals with the sensitive areas of race and religion in O'Connor's life. He also takes us back to those heady days after the war when O'Connor studied creative writing at Iowa. There is much that is new in this book, but, more important, everything is presented in a strong, clear light."-Edmund White

"This splendid biography gives us no saint or martyr but the story of a gifted and complicated woman, bent on making the best of the difficult hand fate has dealt her, whether it is with grit and humor or with an abiding desire to make palpable to readers the terrible mystery of God's grace."-Frances Kiernan, author of Seeing Mary Plain: A Life of Mary McCarthy

"A good biographer is hard to find. Brad Gooch is not merely good-he is extraordinary. Blessed with the eye and ear of a novelist, he has composed the life that admirers of the fierce and hilarious Georgia genius have long been hoping for."-Joel Conarroe, President Emeritus, John Simon Guggenheim Foundation

Praise For Flannery: A Life of Flannery O'Connor…

"Gooch comfortably traces [Flannery O'Connor's] fiction to its real-life roots in a meticulous yet seemingly effortless writing style, resulting in the definitive biography as well as providing the impetus for general readers to return to O'Connor's timeless fiction."
—Booklist (starred review)

"Gooch's biography is a marvel of concision but skimps on nothing.... If O'Connor's writing glows with edged comic genius, biographer Gooch is himself no slouch. If a library is to have only one book on Flannery O'Connor, this should be it. Highly recommended."
—Library Journal

"O'Connor lives and breathes--and spits fire--in Brad Gooch's portrait of the too short life of the peacock-loving writer who dealt in the dark grotesqueries of human nature."
—Elissa Schappell, Vanity Fair

"Gooch is brilliant on [O'Connor's] fiction, passionate and smart, able to contextualize both the individual pieces and the scope of the career."
—David Ulin, Los Angeles Times

"Brad Gooch's rapt, authoritative Flannery is the first major biography of a writer who died 44 years ago....What makes Flannery so valuable is the degree of intimacy with which it captures O'Connor's sensibility."—Janet Maslin, New York Times

"Excellent...Mr. Gooch's is patient and tactful with the publicity-shy and dauntingly complex O'Connor. His book is a welcome introduction to the quiet, narrow life of a fiercely funny and unnervingly powerful writer."
—Adam Begley, The New York Observer

"The story Gooch tells is amply shaded and evocatively detailed...It is a poignant, inspiring story of one brave, dedicated, brilliant writer."
—Floyd Skloot, The Boston Globe

"It's incredible that this is the first biography of the great Southern writer Flannery O'Connor.... As Brad Gooch shows, her life was as dark and rich and dense with meaning as her fiction is."
—Time

"This is one of those rare biographies that makes the writer almost as fascinating as what she wrote."
—Charles Matthews, The Houston Chronicle

"In his engaging, sympathetic, and yet intellectually scrupulous biography of O'Connor, Brad Gooch provides the ideal biographical commentary: his voice is never obtrusive, yet we feel his judgment throughout; his allegiance to his subject is never in doubt, yet we sense his critical detachment, especially in his tracing of the ways in which "Flannery"--as Gooch calls O'Connor--seems to have mapped out a strategy of survival for herself."
—Joyce Carol Oates, New York Review of Books

Brad Gooch is the author of the acclaimed biography of Frank O'Hara, City Poet, as well as other nonfiction and three novels. The recipient of National Endowment for the Humanities and Guggenheim fellowships, he earned his Ph.D. at Columbia University and is Professor of English at William Paterson University in New Jersey.
Loading...
or
Not Currently Available for Direct Purchase