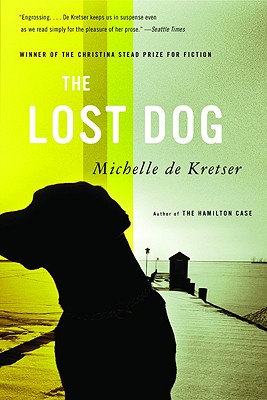 Tom Loxley, an Indian-Australian professor, is less concerned with finishing his book on Henry James than with finding his dog, who is lost in the Australian bush. Joining his daily hunt is Nelly Zhang, an artist whose husband disappeared mysteriously years before Tom met her. Although Nelly helps him search for his beloved pet, Tom isn't sure if he should trust this new friend.

Tom has preoccupations other than his book and Nelly and his missing dog, mainly concerning his mother, who is suffering from the various indignities of old age. He is constantly drawn from the cerebral to the primitive -- by his mother's infirmities, as well as by Nelly's attractions. The Lost Dog makes brilliant use of the conventions of suspense and atmosphere while leading us to see anew the ever-present conflicts between our bodies and our minds, the present and the past, the primal and the civilized.

Michelle de Kretser is a Sri Lankan who has lived in Australia for several years. She is the author of the novels The Rose Grower, The Hamilton Case, and The Lost Dog, and she is currently an associate of the English Department at the University of Sydney.

Praise For The Lost Dog: A Novel…

"Comic, tragic, haunting, hallucinatory and
elusive, but vivid and exact, this is a brilliant
book by a brilliant writer."
—Karen Joy Fowler (author of "The Jane Austen Book Club")

Michelle de Kretser's The Hamilton Case
ratifies every dream one might have of a tropical
landscape....She is, however, as smart and up-
to-date as she can be....A dazzling
performance."—Anita Desai, New York Review of Books

"The Lost Dog is an uncompromisingly literary (and literate) book: ferociously intelligent, highbrow, allusive and unflinching....There are all kinds of terrors lurking within the heart of the book--these are for the reader to discover--but the one that is most palpable is the undeniable fact that this book is touched, like Rilke's "terrible angel," by the terror of greatness."—Neel Mukherjee, Time

"Engrossing. . .De Kretser confidently marshals her reader back and forth through the book's complex flashback structure, keeping us in suspense even as we read simply for the pleasure of her prose. . . . De Kretser knows when to explain, and when to leave us deliciously wondering."—Moira Macdonald, The Seattle Times

"More often than not, de Kretser nails some situation or foible in 20 words or less. . .There is much here that dazzles. . . .De Kretser's writing is as boldly beautiful as ever."—Alison McCulloch, The New York Times Book Review

"A nuanced portrait of a man in his time. The novel, like Tom, is multicultural, intelligent, challenging, and, ultimately, rewarding."—Andrea Kempf, Library Journal

"An intimate and subtle look at Tom Loxley, a well-intentioned but solipsistic Henry James scholar and childless divorcé, as he searches for his missing dog in the Australian bush.... Things progress rapidly, with a few unexpected turns thrown in as Tom and Nelly get together, the murky circumstances surrounding Felix's disappearance are (somewhat) cleared up and the matter of the missing dog is settled. De Kretser's unadorned, direct sentences illustrate her characters' flaws and desires, and she does an admirable job of illuminating how life and art overlap in the 21st century."—Publishers Weekly

"Ruminative and roving in form, an intense, immaculate...novel."—Kirkus Reviews

"A wonderful tale of obsession, art, death, loss, human failure, and past and present loves. One of Australia's best contemporary writers."—Harper's Bazaar (Australia)

"This is the best novel I have read for a long time. The writing is elegant and subtle, and Michelle de Kretser knows how to construct a gripping story."—A.S. Byatt, Financial Times (UK)
or support indie stores by buying on
Copyright © 2020 American Booksellers Association