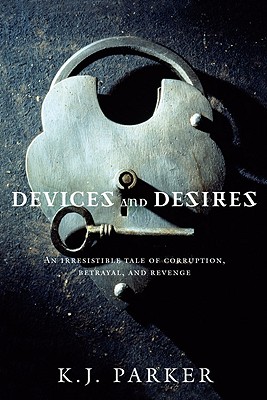 When an engineer is sentenced to death for a petty transgression of guild law, he flees the city, leaving behind his wife and daughter. Forced into exile, he seeks a terrible vengeance -- one that will leave a trail of death and destruction in its wake. But he will not be able to achieve this by himself. He must draw up his plans using the blood of others. . .

In a compelling tale of intrigue and injustice, K. J. Parker's embittered hero takes up arms against his enemies, using the only weapons he has left to him: his ingenuity and his passion -- his devices and desires.

"Parker raises the bar for realistic fantasy war craft with this series opener."—Publishers Weekly on Devices and Desires