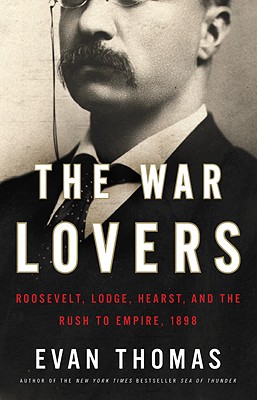 Roosevelt, Lodge, Hearst, and the Rush to Empire, 1898

On February 15, 1898, the American ship USS Maine mysteriously exploded in the Havana Harbor. News of the blast quickly reached U.S. shores, where it was met by some not with alarm but great enthusiasm.

A powerful group of war lovers agitated that the United States exert its muscle across the seas. Theodore Roosevelt and Henry Cabot Lodge were influential politicians dismayed by the "closing" of the Western frontier. William Randolph Hearst's New York Journal falsely heralded that Spain's "secret infernal machine" had destroyed the battleship as Hearst himself saw great potential in whipping Americans into a frenzy. The Maine would provide the excuse they'd been waiting for.

On the other side were Roosevelt's former teacher, philosopher William James, and his friend and political ally, Thomas Reed, the powerful Speaker of the House. Both foresaw a disaster. At stake was not only sending troops to Cuba and the Philippines, Spain's sprawling colony on the other side of the world-but the friendships between these men.

Now, bestselling historian Evan Thomas brings us the full story of this monumental turning point in American history. Epic in scope and revelatory in detail, The War Lovers takes us from Boston mansions to the halls of Congress to the beaches of Cuba and the jungles of the Philippines. It is landmark work with an unforgettable cast of characters-and provocative relevance to today.

Praise For The War Lovers: Roosevelt, Lodge, Hearst, and the Rush to Empire, 1898…

"In his absorbing narrative of men who found duty or fulfillment or personal meaning in a war for empire-and of other men, like William James, who feared that such a quest would rot the nation's soul-Thomas has illuminated, in a compulsively readable style, a critical moment in American history. This is a book that, with its style and panache, is hard to forget and hard to put down."
—Ronald Steel, New York Times Book Review

"Thomas has delivered an innovative, frequently entertaining and valuable retelling of an episode that set the pattern for more than a century of foreign military adventurism. This timely book is a cautionary tale about how the psyche of powerful and ambitious leaders may matter more than fact-or even truth-when the question of war arises."
—James McGrath Morris, The Washington Post

"What can Theodore Roosevelt teach us about President George W. Bush and the post-9/11 thirst for war? Plenty, says Evan Thomas in this finely crafted book about the Gilded Age, when America's desire for empire building fueled the Spanish-American War. A"
—Tina Jordan, Entertainment Weekly

"This very interesting book, well written, with vivid description, personality portraiture and excellent historical depth, has several dimensions...The War Lovers sets us to thinking about these larger aspects of the war with Spain at a time when Iraq and Afghanistan have made our minds receptive."—David C. Acheson, The Washington Times

"[Thomas] generally (and wisely) leaves it to the reader to draw parallels between the two wars. Those parallels are striking: As both conflicts demonstrate, even a short, militarily successful war has the power to make or break careers, wreck old friendships and change the course of a nation's history."
—Drew DeSilver, Seattle Times

"Thomas takes some risks in his biography of Theodore Roosevelt and his cohorts, trying to get not just inside their actions, but inside their heads. The result is an intriguing examination of the pull that war has on men."
—Steve Weinberg, Minneapolis Star Tribune

"[Thomas's] insights into Lodge...and Reed...are a fresh and fascinating view of American politics....[The War Lovers is] a subtle, nuanced history of the country and its leaders as they entered the 20th century."—Bob Hoover, Pittsburgh Post-Gazette

"A rollicking account of the build-up to the Spanish-American War...the pace is breathless, and a glance at the introduction had us hooked."
—W.M. Akers, The New York Observer

"Thomas's historical analogies help bring the past to life....[Thomas] is a masterful writer and analyst and those skills make reading The War Lovers an eminently worthwhile and enjoyable experience."—Claude R. Marx, The Boston Globe

"What causes the eternal pull of war on men? It's one of history's most important questions. Evan Thomas provides fascinating insights in this gripping narrative of America's rush to war in 1898. With a colorful cast of characters led by Teddy Roosevelt and William Randolph Hearst, it's a tale filled with lessons for today."
—Walter Isaacson, author of Benjamin Franklin: An American Life

"No biographer at work today has a surer feel for the human dimension of history than Evan Thomas. In this remarkable and original work, he has painted a portrait of a world at once remote and immediate, describing with grace and skill the conflicting passions and politics that created American imperialism. From Teddy Roosevelt and William Randolph Hearst to Henry Cabot Lodge and William James, Thomas has brought an incomparable cast of characters to vivid life. The presidency and the press of a century ago will strike most of us as awfully familiar, and it is safe to say that no one who wants to understand the America of the 21st century can afford to miss this landmark book on the defining drama of the last dying moments of the 19th. The War Lovers is as good as popular history gets."—Jon Meacham, author of American Lion: Andrew Jackson in the White House

"Evan Thomas is a national resource, and this utterly compelling book reminds us why. In The War Lovers, he takes a crucial historical moment, shows its importance to our own time and recreates its main characters with such insight and blazing color that they seem as if they are alive today. Most of all, Thomas's book suggests vital lessons for our generation of American leaders and citizens to take very seriously as we confront some of the same public challenges that faced Theodore Roosevelt and his contemporaries."—Michael Beschloss, author of The Conquerors: Roosevelt, Truman and the Destruction of Hitler's Germany, 1941-1945

"In The War Lovers, a masterful book with uncanny resonance for today's challenges, Evan Thomas provides a haunting case study of how America cascaded into war in 1898. In his trademark prose, we vividly see the human dimension of the ineluctable push and pull of war, not to mention a poignant story of friendships ripped apart and a nation torn at the seams. This work is a triumph."—Jay Winik, author of April 1865 and The Great Upheaval

"The War Lovers is a vivid, fast-paced and irreverent look at an era most Americans would just as soon overlook. It is also a multiple portrait of some fascinating Americans, but inevitably its central figure is the young Theodore Roosevelt, portrayed with all his eloquence and energy, absurdity and raw aggression."—Geoffrey C. Ward, author of A First-Class Temperament: The Emergence of Franklin Roosevelt

"The War Lovers provides an excellent account of how America's declaration of war after the blowing up of the Maine hastened the demise of the once mighty Spanish empire, and of how within a year Spain had lost the Philippines as well as Puerto Rico and Guam."—The Economist

"While most Spanish-American War histories focus on the military angle, this engaging book humanizes the conflict by also providing useful insights regarding the political and academic leaders of the time, allowing the war to resonate with later American adventures abroad and with the dilemma of reconciling American ideals with a new global world. Highly recommended."
—Library Journal

Evan Thomas is the author of several bestselling works of history and biography, including The War Lovers and Sea of Thunder. He was a writer and editor at Time and Newsweek for more than 30 years, and he is frequently a commentator on television and radio. He teaches at Princeton University and lives in Washington, D.C.