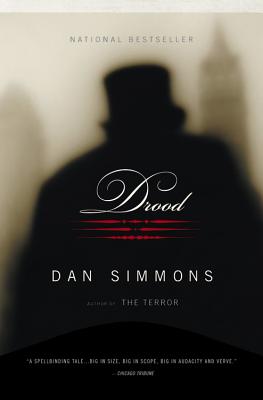 “Spell-binding and macabre, Drood introduces us to a never-before-seen Charles Dickens and his London, both hiding dark secrets. Wilkie Collins is an engrossing narrator, alternately adoring and dismissing his friend and mentor, unable to extricate himself from the developing web of Dickens' strange schemes yet never fully crediting what is happening before his own eyes. A magnificent blend of literary fiction and unsettling thriller, Drood will keep you up at night.”
— Jenn Northington, The King's English, Salt Lake City, UT
View the List

On June 9, 1865, while traveling by train to London with his secret mistress, 53-year-old Charles Dickens -- at the height of his powers and popularity, the most famous and successful novelist in the world and perhaps in the history of the world -- hurtled into a disaster that changed his life forever.

Did Dickens begin living a dark double life after the accident? Were his nightly forays into the worst slums of London and his deepening obsession with corpses, crypts, murder, opium dens, the use of lime pits to dissolve bodies, and a hidden subterranean London mere research . . . or something more terrifying?

Just as he did in The Terror, Dan Simmons draws impeccably from history to create a gloriously engaging and terrifying narrative. Based on the historical details of Charles Dickens's life and narrated by Wilkie Collins (Dickens's friend, frequent collaborator, and Salieri-style secret rival), Drood explores the still-unsolved mysteries of the famous author's last years and may provide the key to Dickens's final, unfinished work: The Mystery of Edwin Drood. Chilling, haunting, and utterly original, Drood is Dan Simmons at his powerful best.

"A dazzling journey through a crooked, gaslit labyrinth and a tenebrous portraiture of the tortured minotaurs that dwell within. Genius is the true mystery, and at its edge--the abyss."—Guillermo del Toro, writer and director of The Devil's Backbone and Pan's Labyrinth

" A spellbinding tale, bold and sly and so steeped in the filigree of this era that it seems to have been written just after a séance during which both Dickens and Wilkie Collins were present."—Julia Keller, Chicago Tribune

"Simmons has captured to a tee the high style of late Victorian melodrama: the story line is consistently engrossing and utterly unpredictable. This rip-roaring adventure is a true page-turner."—Library Journal

Dan Simmons is the Hugo Award-winning author of several novels, including the New York Times bestsellers Olympos and The Terror. He lives in Colorado.
Loading...
or support indie stores by buying on