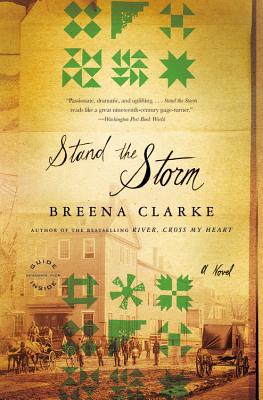 "Passionate, dramatic, and uplifting" (Washington Post), Stand the Storm is an "evocative, historically rich" novel (Time) from the author of River, Cross My Heart set among the free African American community of pre-Civil War Washington, DC.
Even though Sewing Annie Coats and her son, Gabriel, have managed to buy their freedom, their lives are still marked by constant struggle and sacrifice. Washington's Georgetown neighborhood, where the Coatses operate a tailor's shop and laundry, is supposed to be a "promised land" for former slaves but is effectively a frontier town, gritty and dangerous, with no laws protecting black people.

The remarkable emotional energy with which the Coatses wage their daily battles-as they negotiate with their former owner, as they assist escaped slaves en route to freedom, as they prepare for the encroaching war, and as they strive to love each other enough-is what propels Stand the Storm and makes the novel's tragic denouement so devastating.
"A gripping novel about a family's heart-wrenching journey out of slavery." --Baltimore Sun

Praise For Stand the Storm…

"Calling all book clubs! Breena Clarke, whose River, Cross My Heart was an Oprah pick, scores again...She tells the deeply affecting story of a family of freed slaves in an evocative, historically rich book that brings the turbulent Civil War period alive."—Time

"A gripping novel about a family's heart-wrenching journey out of slavery."
—Baltimore Sun

"Breena Clarke again delivers a gripping story and seemingly effortlessly captures the bond between a mother and son and the price of freedom."
—Ebony

Breena Clarke grew up in Washington, DC, and was educated at Webster College and Howard University. She is the author of two widely praised novels, River, Cross My Heart, which was a selection of Oprah's Book Club, and Stand the Storm. She lives in Jersey City, New Jersey.
Loading...
or
Not Currently Available for Direct Purchase