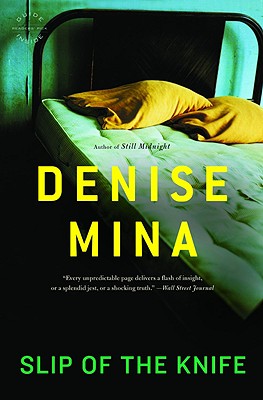 Slip of the Knife

A brilliant thriller featuring Paddy Meehan, one of the most praised heroines since Temperance Brennan, from "a rising star in the world of crime fiction" (Laura Miller, Salon).

Paddy Meehan is no stranger to murder -- as a reporter she lives at crime scenes -- but nothing has prepared her for this visit from the police. Her former boyfriend and fellow journalist Terry Patterson has been found hooded and shot through the head. Paddy knows she will be of little help -- she had not seen Terry in more than six months. So she is bewildered to learn that in his will he has left her his house and several suitcases full of notes. Drawn into a maze of secrets and lies, Paddy begins making connections to Terry's murder that no one else has seen, and soon finds herself trapped in the most important -- and dangerous -- story of her career.

Praise For Slip of the Knife: A Novel (Paddy Meehan #3)…

"Denise Mina has made Paddy smart, feisty, hot-blooded, and guilt-stricken, a riveting creature of her time and place.... Paddy is immensely likeable....Like the star of any foolproof crime franchise, she has become an old friend "
—Janet Maslin, New York Times

"What makes this book so compelling [is] the way Mina brings Paddy and her world to life, building classic mystery tension without sacrificing personal detail. In all her insecurity, Paddy is achingly real...and Mina's note-perfect writing captures Paddy's voice dead-on."—Boston Globe

Denise Mina is the author of more than ten novels, including The Long Drop, winner of the 2017 McIlvanney Prize for Scottish crime book of the year, and the Garnethill trilogy, the first installment of which won the John Creasey Memorial Award for best first crime novel. Mina has twice received the Theakstons Old Peculier Crime Novel of the Year Award. She lives in Glasgow.
Loading...
or support indie stores by buying on