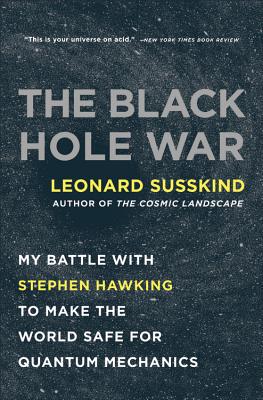 What happens when something is sucked into a black hole? Does it disappear? Three decades ago, a young physicist named Stephen Hawking claimed it did, and in doing so put at risk everything we know about physics and the fundamental laws of the universe. Most scientists didn't recognize the import of Hawking's claims, but Leonard Susskind and Gerard t'Hooft realized the threat, and responded with a counterattack that changed the course of physics.

The Black Hole War is the thrilling story of their united effort to reconcile Hawking's revolutionary theories of black holes with their own sense of reality -- effort that would eventually result in Hawking admitting he was wrong, paying up, and Susskind and t'Hooft realizing that our world is a hologram projected from the outer boundaries of space.

A brilliant book about modern physics, quantum mechanics, the fate of stars and the deep mysteries of black holes, Leonard Susskind's account of the Black Hole War is mind-bending and exhilarating reading.

Leonard Susskind has been the Felix Bloch Professor in theoretical physics at Stanford University since 1978.  The author of The Cosmic Landscape, he is a member of the National Academy of Science and the American Academy of Arts and Sciences, and the recipient of numerous prizes including the science writing prize of the American Institute of Physics for his Scientific American article on black holes.  He lives in Palo Alto, California.
Loading...
or support indie stores by buying on