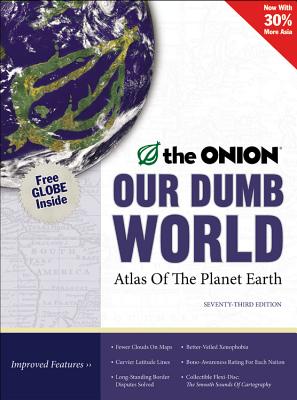 The Onion's Atlas of the Planet Earth, 73rd Edition

Our Dumb World: The Onion's Atlas of The Planet Earth, 73rd Edition features incorrect statistics on all of the Earth's 168, 182, or 196 independent nations.

It also features maps, including a fold-out world map at actual size. Readers will learn about every country from Afghanistan, "Allah's Cat Box," to the Ukraine, "The Bridebasket of Europe."

Today's news-parody consumer cannot possibly understand made-up current events without the context of fake world history and geography. That is why The Onion is publishing a world atlas: to help us.

Our Dumb World is an invaluable tool for any reader interested in overthrowing a weakened government in East Asia, exploiting a developing nation in Africa, or for directions to tonight's party at Erica's. It is a reference guide to 250,000 of the world's most important places, such as North Korea's Trench of Victory, the Great Human Pyramid of Egypt, and Saudi Arabia's superhighway, the Mohammedobahn.

Since its founding by a Prussian tuber farmer in 1756, The Onion has attracted millions of loyal fans drawn to its fearless reporting and scathing commentary on world events, human behavior, and journalistic convention, and it has expanded into an omnipotent news empire, with Webby Award-winning TheOnion.com, Clickhole, and multiple bestselling books, including Our Dumb Century (1999), Our Dumb World (2007), and The Onion Book of Known Knowledge (2012). Its home offices are in Chicago.
Loading...
or
Not Currently Available for Direct Purchase