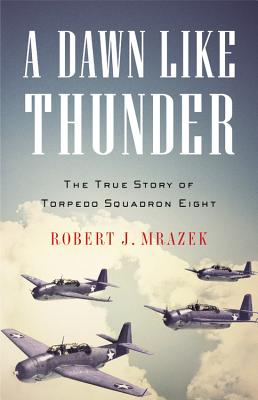 One of the great untold stories of World War II finally comes to light in this thrilling account of Torpedo Squadron Eight and their heroic efforts in helping an outmatched U.S. fleet win critical victories at Midway and Guadalcanal. These 35 American men--many flying outmoded aircraft--changed the course of history, going on to become the war's most decorated naval air squadron, while suffering the heaviest losses in U.S. naval aviation history.
Mrazek paints moving portraits of the men in the squadron, and exposes a shocking cover-up that cost many lives. Filled with thrilling scenes of battle, betrayal, and sacrifice, A DAWN LIKE THUNDER is destined to become a classic in the literature of World War II.


Praise For A Dawn Like Thunder: The True Story of Torpedo Squadron Eight…

"A Dawn Like Thunder hooked me from the first page and didn't let go. Mrazek has written the definitive account of how the few American pilots of Torpedo Squadron Eight changed history at Midway and Guadalcanal. A stirring, truly heroic book that is destined to become a classic."

"A marvelous book. Mrazek's research and obvious affection for his heroes is indeed extraordinary. A Dawn Like Thunder is a spectacular achievement and a vital addition to any Pacific War library."

"Robert Mrazek has, with a raw, unsparing telling given grace and life to so many who died so young, so every-day, so gallantly. Wonderfully uplifting."

"A Dawn Like Thunder is no ordinary history. It is a soaring epic prose ballad about a group of young Americans whose rendezvous with destiny in 1942 at Midway and then Guadalcanal blazed a trail their whole generation would follow. With an amazing depth of research and a keen eye for detail, Mrazek has brought to vivid life an enduring tale of human tragedy and triumph that will speak down to the latest generation."

"Robert Mrazek brings the dare-devil pilots of Torpedo Squadron Eight back to life in a narrative so vivid and heartbreaking that their courage reaches across the decades, leaving us moved by their incredible sacrifice and heroism."

"A remarkably vivid tale of valor, fate, and young men dying young. Mrazek's epic story, reconstructed with breathtaking research and recounted with a novelist's keen eye for detail, is a worthy monument to Torpedo Squadron Eight."

"The most highly decorated Navy Flyboys of World War II flew through hell and suffered the highest combat losses. Strap yourself in as Robert Mrazek takes you on a heroic flight into history."