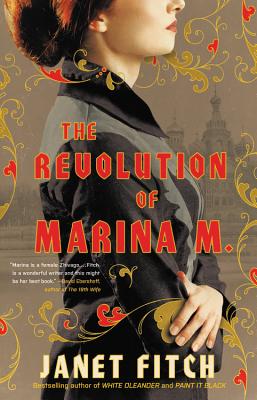 The Revolution of Marina M.

From the mega-bestselling author of White Oleander and Paint It Black, a sweeping historical saga of the Russian Revolution, as seen through the eyes of one young woman.

St. Petersburg, New Year's Eve, 1916. Marina Makarova is a young woman of privilege who aches to break free of the constraints of her genteel life, a life about to be violently upended by the vast forces of history. Swept up on these tides, Marina will join the marches for workers' rights, fall in love with a radical young poet, and betray everything she holds dear, before being betrayed in turn.

As her country goes through almost unimaginable upheaval, Marina's own coming-of-age unfolds, marked by deep passion and devastating loss, and the private heroism of an ordinary woman living through extraordinary times. This is the epic, mesmerizing story of one indomitable woman's journey through some of the most dramatic events of the last century.

Praise For The Revolution of Marina M.: A Novel…

"Marina's unlikely
bildungsroman proves so gripping that it's hard to put down...Fitch depicts [the
Revolution] with devastating accuracy and imaginative power...sprawling, majestic."

"This epic tale from
the bestselling author of White Oleander follows Marina Makarova, a young woman
living in St. Petersburg at the start of the Russian Revolution in 1916.
Looking to escape from her privileged life, she joins the marches for worker's
rights-and finds herself falling in love with the movement and a young radical.
In this relatable coming-of-age novel, Marina grapples with a changing world
and struggles to find her place in it."

"A captivating novel starring an unforgettable heroine, The Revolution of Marina M. shows you a side to the Russian Revolution you've never seen before."—Sadie Trombetta, Bustle

"It's a portrait of a
moment in time -- of a woman in time, in fact -- that we don't often see, and you'll
find yourself savoring each and every word of this breathtaking novel."

"Janet Fitch's novel shimmers with vital energy...[she] clearly did an astounding amount of research for the novel, which luxuriates in exotic period details...The Revolution of Marina M. is hard to put down...it is charming and lively and ultimately worth the time."—Trine Tsouderos, Chicago Tribune

"Janet Fitch's The Revolution of Marina M., an epic tale of one young woman's story amid the drama and tragedy of the Russian Revolution, is just the thing to keep you both personally inspired and seasonally appropriate."—Mary Sollosi, Entertainment Weekly

"This is an epic
page-turner of a novel."
—Mackenzie Dawson, NY Post

"Incandescent. Fitch has expertly drawn the world of Russia in 1916 in
flurries of white, like an exquisite snow globe, and then nudged it to the edge of a precipice, until in one
jarring push, it falls. It crashes and each brilliant shard lifts and
swirls. Poets, artists, profiteers, soldiers, cult leaders, sadists, idealists,
blood, sex, hope all piecing together in a new life, a new country. The
brilliant Janet Fitch has written yet another powerful, kaleidoscopic novel."

"The Revolution of Marina M. takes us deep inside the Russian Revolution and lets us witness it through a pair of remarkable eyes. Marina is a female Zhivago - a poet who uses her intelligence, her passion, and her love of language to interpret and survive the political turmoil around her. Janet Fitch is a wonderful writer and this might be her best book."—David Ebershoff,author of The Danish Girl and The 19th Wife

"There's brilliance in this book: concept, structure,
style. If the horrors associated
with the Russian revolution freeze your blood, remember the fire and brimstone
of our own Civil War. Read this novel for the passion of the main character, a
girl becoming woman and poet with ten times the vitality and intellect of
Scarlett O'Hara."