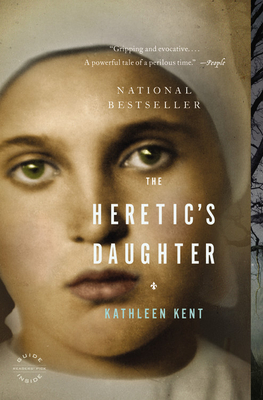 “This is a novel of family, of mothers and daughters, and of the Salem witch trials told from such an intimate perspective you can smell the hearth and feel the cold of a New England winter. The Heretic's Daughter is enveloping and rich in historic detail and tone -- a beautifully written masterpiece.”
— Calvin Crosby, Books Inc., San Francisco, CA
View the List

A courageous woman fights to survive the darkest days of the Salem Witch Trials in this "heart-wrenching story of family love and sacrifice" (USA Today).

Salem, 1752. Sarah Carrier Chapman, weak with infirmity, writes a letter to her granddaughter that reveals the secret she has closely guarded for six decades: how she survived the Salem Witch Trials when her mother did not.

Sarah's story begins more than a year before the trials, when she and her family arrive in a New England community already gripped by superstition and fear. As they witness neighbor pitted against neighbor, friend against friend, the hysteria escalates -- until more than two hundred men, women, and children have been swept into prison. Among them is Sarah's mother, Martha Carrier. In an attempt to protect her children, Martha asks Sarah to commit an act of heresy -- a lie that will most surely condemn Martha even as it will save her daughter.

This is the story of Martha's courageous defiance and ultimate death, as told by the daughter who survived.

Praise For The Heretic's Daughter: A Novel…

"The Heretic's Daughter is raw, honest and completely captivating..."—Anita Shreve

"A powerful coming-of-age tale in which tragedy is trumped by an unsinkable faith in human nature."—Chelsea Cain, New York Times Book Review

"Kent's moving story comes straight from her heart as well as the historical record...Kent tells a heart-wrenching story of family love and sacrifice."—Carol Memmot, USA Today

".... an eminently readable novel, and a tribute to a woman who held steadfastly to the courage of her convictions."—Christian Science Monitor

"Ms. Kent brings a gentle decency to her portrait of this nasty episode in American life."—Joy Tipping, Dallas Morning News

"An authentically moving story that is as much about a mother and a daughter as the terror of the times."—NY Daily News

"Gripping and evocative, THE HERETIC'S DAUGHTER is a powerful tale of a perilous time."—People

"THE HERETIC'S DAUGHTER is haunting; unlike in seventeenth-century Salem, there is real magic at work here."—Texas Monthly

"A family's conflict becomes a battle for life or death in this gripping and original first novel...Sarah's front row view of the trials and the mayhem that sweeps the close-knit community provides a fresh, bracing and unconventional take on a much covered episode."—San Francisco Examiner

"[a] close look at family and village life, at the hearth and the harshness out of which the accusations of witchcraft grew... The misery behind bars reflects Kent's rich imagination. She also shows the fruits of historical research in details that let you glimpse the past as it was lived, in the barn or field, at the inn or church. To this she adds descriptive gifts.... It goes on like that, wonderfully. I hope Kent does too."—Bloomberg News

Kathleen Kent is the author of the Edgar Award-nominated The Dime, as well as the bestselling historical novels The Heretic's Daughter, The Traitor's Wife, and The Outcasts. Kent lives in Dallas, TX.