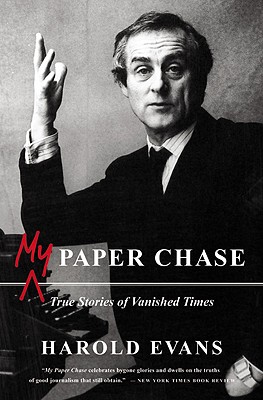 In My Paper Chase, Harold Evans recounts the wild and wonderful tale of newspapering life. His story stretches from the 1930s to his service in WWII, through towns big and off the map. He discusses his passion for the crusading style of reportage he championed, his clashes with Rupert Murdoch, and his struggle to use journalism to better the lives of those less fortunate. There's a star-studded cast and a tremendously vivid sense of what once was: the lead type, the smell of the presses, eccentrics throughout, and angry editors screaming over the intercoms. My Paper Chase tells the story of Evans's great loves: newspapers and Tina Brown, the bright, young journalist who became his wife.

In an age when newspapers everywhere are under threat, My Paper Chase is not just a glorious recounting of an amazing life, but a nostalgic journey in black and white.

Harold Evans is a British-born journalist and writer who was editor of the Sunday Times from 1967 to 1981. A graduate of Durham University, he has written a number of bestselling histories. He followed the late Alistair Cooke in commentaries on America for the BBC. An American citizen since 1993, he has held positions as editor-in-chief of the Atlantic Monthly Press, founding editor of the prize-winning Condé Nast Traveler; editorial director of the Atlantic and US News and the New York Daily News; and president and publisher of Random House.

He holds the British Press Awards' Gold Award for Lifetime Achievement of Journalists. In 2001 British journalists voted him the all-time greatest British newspaper editor, and in 2004 he was knighted. Since 2011, he has been editor-at-large for Reuters.

Praise For My Paper Chase: True Stories of Vanished Times…

PRAISE FOR MY PAPER CHASE:


"My Paper Chase is a fight song that revels in the music of times past...It celebrates bygone glories and dwells on the truths of good journalism that still obtain."—David Carr, New York Times Book Review

"Not only is My Paper Chase a loving homage to the joys of old-fashioned British newspapering but it has allowed Mr. Evans to tell at proper length stories that should now be taught as classics in journalism schools worldwide."—Simon Winchester, New York Times

"A refreshing memoir...Evans jettisons hand-wringing over the 'vanished' times of its melencholy subtitle for one man's unquenchable enthusiasm for his life's work...My Paper Chase is the Gospel of Evans, and the gospel makes juicy copy."—Justin Moyer, Christian Science Monitor

"Old school newspapering comes alive in this scintillating memoir. Evan's creates a lively, evocative portrait of 20th-century journalism...Written with self-deprecating humor and quiet conviction, this is a fine valedictory for a heroic style of journalism one hopes still has a future."
—Publishers Weekly

"Amid pervasive gloom surrounding the future of newspapers, Harold Evans has produced a memoir to lift the spirits."
—Financial Times
or
Not Currently Available for Direct Purchase
Copyright © 2020 American Booksellers Association