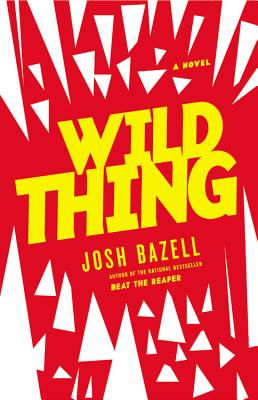 It's hard to find work as a doctor when using your real name will get you killed. So hard that when a reclusive billionaire offers Dr. Peter Brown, aka Pietro Brnwa, a job accompanying a sexy but self-destructive paleontologist on the world's worst field assignment, Brown has no real choice but to say yes. Even if it means that an army of murderers, mobsters, and international drug dealers -- not to mention the occasional lake monster -- are about to have a serious Pietro Brnwa problem.

"[Bazell's books] are hard-boiled thrillers, written in one of the most distinctively entertaining new fictional voices I've run across in years, in any genre. There is a massive density of information in [Wild Thing]...but Bazell wields it with wonderful lightness. Reading him is like being able to monopolize the attention of the most interesting person at a party...It's so rare that you see a really brilliant writer who is committed, 100%, in every sentence, to giving you a good time. Bazell is, and he does."
—Lev Grossman, Time

"The book is composed in Bazell's propulsive, profanity-laden style, peppering startling violence with detailed footnotes that cover subjects like tooth reinsertions and human cryogenics...Props to Bazell for not cranking out an idle retread of Beat the Reaper. A funny, unexpected journey for our hero that sets up the next installment with finesse."—Kirkus

"Is this novel better than Bazell's debut? It's as good as and more. In addition to the mayhem and madness of the original, there's an element of ecoconsciousness and political satire (the long-delayed appearance of the government official is worth the purchase price) that will leave readers wanting still more. Bazell makes being smart sexy and footnotes fun."—Bob Lunn, Library Journal

"A rousing, fast-paced sequel...Bazell's mix of violent lunacy and social commentary should appeal to fans of Carl Hiaasen...The novel is packed with witty footnotes, and when Brnwa isn't lusting after the paleontologist, he's a profanely trenchant social observer."—Washington Post

"Bazell's inventiveness and a series of plot twists ensure that Wild Thing never lets up...For suspense, the monster plot sinks its claws in, blending the best of Jaws with the comic sense of your favorite episode of Scooby-Doo. At its heart, this book is wildly fun."—San Francisco Chronicle

"A very thoughtful examination of the collision of rationality and superstition...Comes with the funniest footnotes and appendix (no kidding) ever written."—Daily Beast

"The novel is violent, sexy and relentlessly funny."—Cleveland Plain Dealer

"Wild Thing walks, talks, and squawks like a crime thriller, but it makes casual passes at left-field absurdity that aim for Hiaasen or Vonnegut...a fun, fast read."—Entertainment Weekly

Josh Bazell has a BA in writing from Brown University and an MD from Columbia.  His first book, the international bestseller Beat the Reaper, has been published in thirty-two languages and was one of Time's ten best novels of 2009.  He lives in Brooklyn and Barcelona.
Loading...
or
Not Currently Available for Direct Purchase