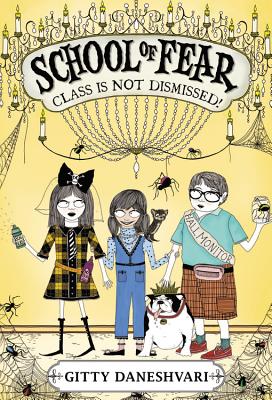 Class Is Not Dismissed!

Have no fear! The frightened foursome are back in this this wickedly funny and phobia-inducing sequel to School of Fear!

Everyone is (still) afraid of something...

Theodore Bartholomew is petrified of dying;

After discovering that each of her former students has secretly regressed, headmaster Mrs. Wellington brings Madeleine, Theo, Lulu, and Garrison back for mandatory summer school. Facing their fears is terrifying enough, but when they are joined by a fifth student (and another mysterious entity lurking in the woods) things start to get even scarier.

Gitty is the author of the series The League of Unexceptional Children, School of Fear, and Monster High: Ghoulfriends. She invites you to visit her online at GittyDaneshvari.com and @GittyDaneshvari.
or support indie stores by buying on
Copyright © 2020 American Booksellers Association